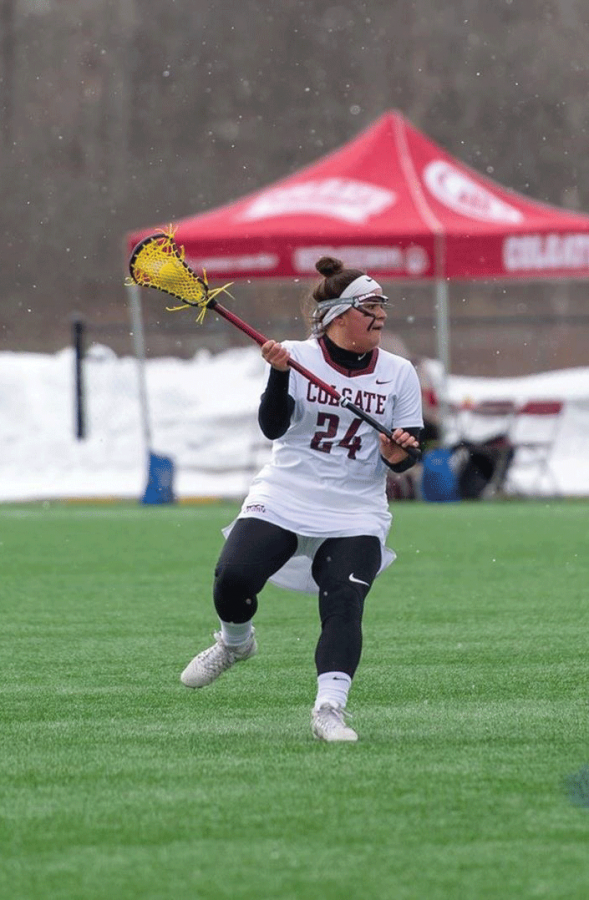 Raiders Lose to Army and Loyola in Patriot League Play

This past week, the Women’s Lacrosse Team took on both the Army Knights on Wednesday, April 17, and the Loyola Greyhounds on Saturday, April 20. Despite two tough Patriot League losses, the Raiders were able to clinch a spot in the Patriot League tournament.

During their mid-week game, the Colgate Raiders fell to Army 12-9. First-year midfielder Caroline Raymond and sophomore attacker Jackie Brattan put up the first five goals for Army, all unassisted. Senior attacker Tara Atkinson and first-year midfielder Jacklyn Hooey were responsible for the first three Colgate goals. Atkinson scored once unassisted and assisted Hooey on two other quick goals to end the first half trailing 3-5.

Brattan continued to be a stand-out for Army, putting up another four goals in the second half, earning her 50th goal of the season. Colgate’s sophomore attacker Danielle Van Calcar netted two goals off of assists from junior attacker Payton Gabriel and sophomore attacker Kyra Weiner to tie the game 5-5. Atkinson then recorded her 100th career point, scoring her 16th and 17th goal of the season in the second half of play, both unassisted.

Despite falling short in the final score, the Raiders put up a good effort on the field, only turning the ball over seven times and having a 100 percent clearing rate. The Raiders next traveled to Baltimore, Maryland, to finish off their week against the Greyhounds.

The Raiders held the no. 1 Greyhounds scoreless for the first six minutes of play; however, during the following ten minutes of play, the Greyhounds were able to pull a 0-6 lead over the Raiders. With 15 minutes left in the first half, the Raiders finally got on the board when Atkinson scored off of two free-position shots. Junior attacker Lindsay West and junior midfielder Noelle Patterson both put up goals late in the first half to only trail the Greyhounds by five heading into half time. Atkinson, Patterson and West all scored again in the second half in addition to Weiner adding an unassisted goal and first-year midfielder CC Telesco adding a goal and an assist. Despite their long fight, the Raiders trailed Loyola 9-18 at the time of the final whistle.

Loyola advanced to 8-0 in Patriot League Play and clinched the first seed for the post-season tournament. Sophomore midfielder Olivia Duarte made impressive efforts on the draw. She won a career high of six of Colgate’s ten draw controls and was able to shut down Loyola’s Tewaaraton watch-list draw specialist Taylor VanThoft.

Atkinson had her second straight hat-trick, proving to lead the team heading towards post-season play.

“This week we had a huge week with two big games that obviously did not go our way, but I am super proud of the fight our team put up and I am confident that it is going to help us going into our last league game and into playoffs,” Atkinson said.

The Raiders will finish off their in-season play on Friday, April 26, when they take on Lafayette in Easton, Pennsylvania. The Raiders will stay on the road for the weekend and play in the Patriot League Quarterfinal matchup on April 28, when the team will play at either Army or Boston University. If they win their quarterfinal game, the league semifinals and final will be held at Loyola in Baltimore, Maryland as the Greyhounds are currently the top-ranked team in the league.