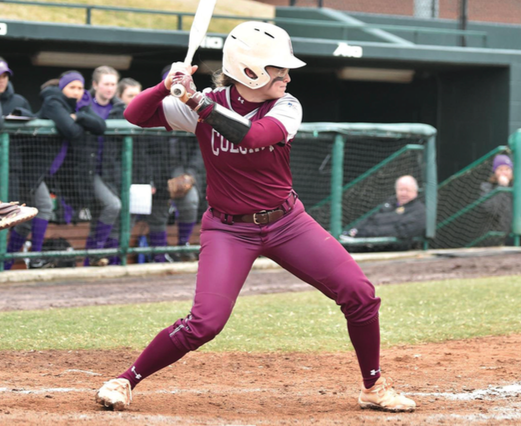 On Saturday, March 30, the Colgate women’s softball team played a doubleheader series against the SUNY Albany Great Danes. The team entered the week at 11-15, an improvement over last year’s record of 5-21 at the same time last season.

The first game of the doubleheader was at 1 p.m. and got off to a poor start for the Raiders. In the bottom of the first, Great Dane senior catcher Chelsea Henige homered to make the score 2-0, followed by junior infielder Kelly Barkevich scoring off a single to make it 3-0 at the end of the first.

Colgate was able to get one back right away though, when sophomore outfielder Mia Guevarra homered off the second pitch of the inning to put Colgate back within two. It wasn’t enough to help turn momentum however as Albany extended their lead when an error at second base allowed Albany sophomore infielder Katie Falotico and senior outfielder Aliyah Wade to find their way home and put the score at 5-1.

Albany continued to keep up the hot batting in the third as they stretched their lead to 8-1. Sophomore pitcher Maranda Jimenez scored after a fielding error on a hit by first-year infielder Love Drumgole. Drumgole then came home along with Wade on a double by Falotico to stretch the Albany lead to seven.

The Raiders were able to get one more run on the scoreboard when junior outfielder Jordan Miller grounded out to third base sending first-year Rebecca Johnson across the plate to make it 8-2. The score would stand through the remaining two innings and the Great Danes would ultimately take the win.

In the second game of the day, the Raiders came in looking to right the ship. Both teams struggled through a scoreless first four innings of the game. Between the two teams, they were only able to muster five hits as both defenses remained rock solid. That changed in the fifth when Colgate came out swinging. Senior infielder/outfielder Meghan Romero doubled to right field and sent home junior utility player Cayman Coughlin to give the Raiders a 1-0 lead. The next batter, first-year infielder Morgan Farrah, hit a single to put two on base. The Raiders extended their lead when junior catcher Virginia Irby homered, driving herself, Farrah and Romero home to give the Raiders a 4-0 lead.

Despite the momentum that Colgate had gained, Albany was able to respond in the bottom of the inning when junior outfielder Mariah Miramontez doubled through the center and sent Wade home to give the Great Danes a run.

That would be all the scoring on the day, however, as the final two innings mirrored the first four and no one was able to find an offensive breakthrough. The win pushed the Raiders to 12-16 on the season which is more wins than the team had the entirety of last year. The team’s next series is a two- day three-game trip to West Point, NY to take on Army on Saturday and Sunday April 6 and 7. The teams next home game will be on Wednesday, April 17 at 4 p.m. at Eaton Street Field against ACC power Syracuse.