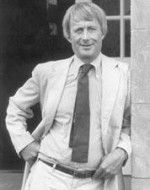 On September 27 former Colgate Provost and Professor of History Charles “Chuck” Trout passed away of complications from blood cancer.

As provost, Trout was responsible for overseeing all of Colgate’s academic programs and other school initiatives. He was also the Dean of the Faculty and played an important role in attracting world-class faculty to Colgate.

During Trout’s tenure from 1981 to 1990, he significantly revised the CORE curriculum. He also oversaw the addition of new programs in neuroscience, Women’s studies, Asian studies and Africana and Latin American studies.

These achievements were the result of Trout’s ability to strengthen the schools where he worked. After graduating from Amherst College and receiving his Master’s Degree and doctorate from Columbia University, he taught at The Hill School in Pennsylvania and Phillips Exeter Academy in New Hampshire. Later, Trout became chairman of the history department at Mount Holyoke College in Massachusetts.

For his accomplishments as an historian and professor, Trout was named a National Endowment for the Humanities Senior Fellow. He was also named a Charles Warren Fellow at Harvard University, an honor that allows recipients to spend a sabbatical year at Harvard researching a specific area of American history.

Trout then came to Colgate, where he was a professor of social history and a skilled provost. Members of the history department remember him fondly.

“Charles Trout was a creative, innovative dean who helped move Colgate to a new level of excellence,” Christian A. Johnson Professor in Liberal Arts Studies and Professor of History Jill Harsin said. “He valued scholarship as well as teaching. He was on the cutting edge in terms of establishing interdisciplinary programs…which, in turn, made Colgate more competitive in recruiting good faculty.”

After Colgate, Trout became the President of Washington College in Maryland, where he served for five years. He is credited with improving diversity on campus there, as well as strengthening academic and athletic programs.

At age 60, Trout and his wife Katherine went to Africa with the Teachers for Africa Program and taught history to schoolchildren in Litein, Kenya for a year. He later reflected very positively on the experience.

He then went on to be the President at Harcum College, a two-year college in Bryn Mawr, Pennsylvania, where he stayed until his recent passing. Harcum College laments the loss of its President who, in his four years there, increased the size of the student body, resurrected the athletic program, constructed new facilities and laid out a road map for continued success and improvement.

“Perhaps his biggest contribution to the College has been his infectious enthusiasm and optimism,” said Chair of the Harcum Board of Trustees Dennis S. Marlo. “Chuck made everyone a believer in the great things that Harcum can achieve.”

Charles Trout is survived by his wife Katherine and his children Nicolas, Benjamin, and Katherine. Condolences may be sent to: Katherine Trout, 211 North Queen Street, Chestertown MD 2162.