Gate Sports At A Glance 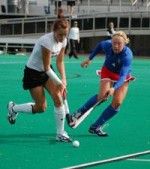 Saturday brought No. 11 American University to Tyler’s Field in the opening of Patriot League play as the Raiders hoped to get their feet back on the ground after a series of tough games.

American was the dominant force of the first half, keeping the Colgate defense’s hands full. But Colgate answered the call, holding American’s offense until the twenty-sixth minute. Then, with 8:35 left in the first, American’s Heidi Hershberger broke through the Raider back line to score the game’s first goal.

It then went from drizzle to downpour when six minutes later Hershberger’s teammate Denise Infante drew Raider goalkeeper Jacque DeMarco wide right, shooting the ball straight into the goal’s left pocket. This was followed by a goal from American’s Camila Infante just over a minute later.

Going into the second half, the Raiders were anxious to score, and first-year Katelyn Nerbonne did just that at the 44:57 mark, hitting the cage from the left side of the arc.

The Raiders continued their barrage eighteen seconds later, when Nerbonne put another ball past American’s goalkeeper, Allison Fayfich. American posted a quick response, though, when Denise Infante scored her second goal of the game at 47:04.

With 10:46 left in regulation, a ball fed by junior Natali Plesniarski found Nerbonne deep on the sideline. Nerbonne took it from there, beating Fayfich to secure Colgate’s third and final goal of the game. Nerbonne’s hat trick was the first by a Raider in over 18 years.

Despite the 4-3 loss, the game lifted the team’s spirit and outlook on the remainder of the season.

“We had nothing to lose coming into the game against a team ranked 11th in the country. We stepped up all aspects of our game and played with intensity,” Nerbonne said. “Playing so well has made us realize our potential.”

The Raiders will continue Patriot League play on Saturday when they host Holy Cross at 11:00 am on Tyler’s Field.