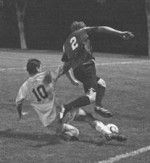 The Colgate men’s soccer team had a positive result in its Patriot League match this past week, but saw its undefeated season and national ranking disappear after a tough midweek loss.

The men were on a hot streak heading into Bucknell last weekend, as they had won four in a row and held an impressive eight game unbeaten streak going into the game.

The game could not have gotten off to a worse start for the men when Bucknell took the lead just 53 seconds into the game.

“We were in shock and I could not believe they got that kind of chance that quickly into the game,” Junior Dan Belke explained. “We had a tough first half, but we continued to play solid defense and didn’t break the rest of the game.”

The Raiders did not have their best first half and senior goalie Doug Litvack had to make some big saves to keep the game close.

Even so, the men showed incredible fight and determination throughout the second half. The Raiders had come extremely close to scoring several times in the second half before the equalizer finally came.

After some great control by senior Charlie Lambropoulos, he sent in a perfect pass that was headed in by Junior Eric Anton in the last ten minutes of the game. The goal was Anton’s second of the year and it ended his seven-game scoring drought. Both teams fought hard to find the game winner, but the game would end in a 1-1 tie.

“We were clearly not ready to play from the start,” Head Coach Erik Ronning said. “However, we showed great resolve and got a big point on the road. This result is by no means a negative considering the way the game started. I am really proud with how everyone played and this was a big result in the Patriot League.”

The tie gave the Raiders a 2-0-1 record in the Patriot League. The Raiders could not rest on this result, as three days later they traveled to Oneonta to square off against a very tough Hartwick squad.

The men hoped to continue their unbeaten ways, but the game did not go well from start to finish. Hartwick took an early lead, as they scored 20 minutes into the game.

The Raiders produced few chances and were put away when Hartwick scored a goal early into the second half. The men played nowhere near their best and they allowed the most goals they have let up in one game this season.

“I did not have the team ready to play and we were no where near as successful as we could have been,” Ronning said. “We played all right, but we were uncharacteristically low on energy and fight. Even so, we need to put the loss behind us and we should be proud for the fact that we have been unbeaten for this long.”

The loss was the Raiders’ first as their record now stands at 6-1-3. The results of this past week also caused the men to be left out of this week’s national poll, but the Raiders are still in a good position in the Patriot League.

Colgate travels to Navy this weekend for what should be another great Patriot League battle.

Ronning knows the implications of the game and he knows the team will be ready. “Good teams know how to bounce back from negative results and we will be prepared against Navy,” he said. “A positive result will get us one step closer to a birth in the Patriot League Tournament.”

It was a tough week for the Raiders, but the men are still in great position and have a chance to cement themselves as a top four team in the Patriot League this weekend.