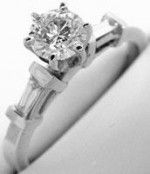 Relationships have so many obstacles thrown at them; sometimes I don’t know how the ideal of romantic love survives. Especially on a college campus full of hookups, breakups and one-night stands, real emotional substance is not always a priority. Granted we’re all relatively young, and most of us aren’t in love or looking for a proposal just yet. I just know personally, I would rather be in a relationship that means something, as opposed to going out every weekend with someone new. While being single obviously encompasses romantic and sexual exploration, there’s a big difference between hooking up and dating, and I’d rather date. Maybe it’s just because I’m newly single after being with one guy for almost two years, but my mind isn’t wired for involvement with multiple guys. I want to mean more and be more than just a Friday night lay.

However, making out in a dark corner is a lot easier than having serious conversations about life experiences, families and goals for the future. Learning someone’s quirks, discerning between the image they project and who they actually want to be and truly getting to know them takes effort, persistence and genuine interest beyond the physical. Friendship can be an excellent foundation for solid relationships with actual depth to them. Establishing trust in a friendship and building on that trust makes intimacy more natural, not to mention more comfortable.

Then again, if the relationship ends badly (for example, with cheating) the friendship can be completely destroyed. In a similar vein, being involved with neighbors is dangerous. Breaking the heart of a hallmate will make the atmosphere awkward, especially if a new love interest is coming over anytime soon. If they are the jealous vengeful type, I really wouldn’t want them to know where I sleep. And let’s not even get started on unrequited feelings. Pining away for someone you see every day in a social context can have a severe impact on schoolwork and general sanity.

And just when I thought I’d finally beaten the odds and found a decent, interesting guy who seems sweet, makes me laugh and isn’t pressuring me to have sex with him, I can’t date him because there’s some other barrier in the way. He’s an awesome person and I’ve had a crush on him from the day we met, but there’s a religious clash. I’m not saying we’d be dating if there wasn’t a religious issue, because people are always more complicated than their cover stories, but I know there would be a better chance.

That’s really frustrating, because I feel like I’m not good enough for him or his family even though I had no control over what religion my parents practiced or how I was raised. This was my first experience with an issue not dealing with differences in personality or lifestyle. Far from being trivial, I was forced to stop and think about how serious problems can arise from differences in religion, age, race and societal or familial expectations and how outside factors substantially affect what relationships survive, or even have a chance.

I do, however, believe there is hope. Maybe not in my particular circumstance, but I think real love and devotion override what other people and institutions might expect or condone. Love is not about complacency; it takes work and sacrifice and compromise. Movies like Garden State, The Notebook and The Princess Bride have widespread appeal because they show how difficult relationships can be, but also how rewarding. In some form or other, most of us want companionship. So whether you’re seeking a soul mate or just a fun night out, I wish you the best of luck. You’re going to need it.