Raiders Take It To The House 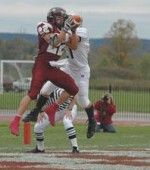 Homecoming weekend is all about celebration, and the Raiders certainly gave their fans something to celebrate. Colgate beat up on the Georgetown Hoyas on Saturday, handing them a 31-14 loss in the Raider’s Patriot League opener.

Sophomore running back Jordan Scott had another big day for Colgate, rushing 29 times for 169 yards and a touchdown despite not playing in the fourth quarter. His steady play helped the Raiders to control the clock and the pace of the game, never allowing Georgetown to seriously threaten Colgate’s lead.

Senior quarterback Mike Saraceno also had a terrific game, completing 10 of 12 passes for 131 yards and two touchdowns and rushing for 22 yards and a touchdown. Most importantly, Saraceno protected the ball and did not throw an interception, lose a fumble or get sacked once in the game.

“He’s not forcing any throws,” said Head Coach Dick Biddle. “The pass protection was good and Mike’s mobile enough to get away from tackles and gain yardage.”

The defensive unit played a large part in the victory, forcing five turnovers including an interception and fumble recovery by junior cornerback Cody Williams. Junior linebacker Mike Gallihugh led the team with nine tackles, along with forcing a fumble and recovering two fumbles; he was named the Patriot League Defensive Player of the Week for his efforts. Gallihugh was followed closely by sophomore defensive back Sam Breslin who registered eight tackles, counting a big sack in the first quarter that stifled Georgetown’s first drive.

The Raiders began the scoring on their first drive after senior safety Geoff Bean’s 35-yard kickoff return put the team in great field position. On their seventh offensive play, Saraceno passed to sophomore wide receiver David Morgan, who was open in the end zone for the first touchdown reception of his career.

Colgate struck again later in the opening quarter, taking advantage of a Georgetown fumble. Saraceno scrambled 2 yards into the end zone after a long Jordan Scott run, putting the score at 14-0. Georgetown would pull within a touchdown in the second quarter on a three-yard pass from quarterback Matt Bassuener, but the Raiders went back up by ten just before half via a 23-yard field goal by Jacob Stein.

Just three minutes into the second half, Jordan Scott rumbled 29 yards for Colgate’s third touchdown of the day; the Raiders would not look back from there. Saraceno and Morgan connected again for Colgate’s final touchdown minutes later off a 23-yard pass play, capping a 91 yard, two touchdown day for the blossoming Morgan. It was another score off a forced turnover by the Raiders’ swarming defense, who gave the offense short fields all day long. Georgetown added a touchdown with less than two minutes remaining in the game, finalizing the score at 31-14.

“The players prepared very well for the game,” Biddle said. “We’ve played Georgetown a few times and knew what to expect. But it was definitely important to win our first league game.”

The victory was a significant bounce-back game after last week’s disappointing 17-12 loss to Monmouth. The Raiders are now 1-0 in the Patriot League and 2-2 overall. They host Princeton this Saturday at 1 pm and are looking to post a 3-1 record for their four-game homestand.