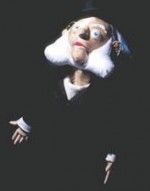 Gwendolyn Warnock, Kirjan Waage, David Arkema and Gabrielle Brechner are members of the Wakka Wakka Production Team, based in Queens, New York. According to its mission statement, “Wakka Wakka Productions is devoted to pushing the boundaries of the imagination by creating works that are bold, unique and unpredictable; to the creation, development and professional production of original works; and to the promotion of arts awareness and education.” After seeing The Death of Little Ibsen on Friday night, it is clear that they have indeed met all of these objectives.

Henrik Ibsen has been dead for 100 years. This significant date was the catalyst for this progressive theatrical work. “We wanted to create a piece to celebrate the life of this poet and playwright,” Warnock said. The commemoration is fitting; Ibsen was a renowned Norwegian author, possibly the “most frequent performed dramatist in the world after Shakespeare.”

It would be a challenge to describe what transpired in the hour or so that the production occurred. It was a fusion of acting, puppetry, and sound effects so spot on they could be mistaken for reality: Waage let out a wail that sounded like an infant, Warnock’s puppet yodel made it clear she had extensive vocal training and Arkema manipulated a piece of paper to look like alarmingly like a butterfly. The team designed the set as well. The stage looked simple and held only a wooden table, a closet, a small door, a chair and two rocks. Further inspection revealed impressive detail: moss and small ferns, bits of grass and brown lichen adorned the pieces. During the play, doors opened constantly, revealing painted settings, dioramas, and stages; each one was as finely crafted as the next.

The actors seemed emotionally invested in the puppets they operated. Although their faces were masked by black face paint, you could see them smile when their characters were excited or laugh at the exchanges between their fellow cast members. When tragedy befell one of their characters, the actors looked dejected and sorrowful. Their expressions could have been planned or just the actors enjoying their work. Regardless, by infusing their energy, voices, and movements, the actors gave life to the lifeless.

The size of the puppets varied. Some of the smaller ones were operated with just two fingers. The accuracy of the movement was startling – at one point Ibsen did an Irish jig complete with clicking heels. Arkema’s dog puppet moved in an enviably realistic manner, his own tongue out lolling amidst tonally accurate yips and barks. The puppets were all crafted impeccably. Every member of the audience craned their head to see the next creation emerge, which range in scope from animals — goats, pigs and the aforementioned canine caricature — to people — a topless maid, several babies, business men and a pharmacist — and no one was disappointed. Much of the play was infused with sexual undertones: Ibsen, it seems, was quite a ladies’ man – cheating on his wife, keeping various mistresses and fathering illegitimate children.

The audience got the benefit of seeing Ibsen’s train of thought: each moment of his creative process was documented through puppetry and dream sequencing. His critics were ever present as well, red devils or horned creatures who sing in unison and make funny faces at one another. The mastery of the puppets was remarkable. It is hard for puppets to glare, be condescending or exhibit emotion – but the Wakka Wakka team made it possible.

They work well together – probably a result of being together from 10 am to 1 am in the month before the production of The Death of Little Ibsen — and are clearly passionate about what they do.

Warnock is originally from Ohio. She is kind, with short black hair and discerning eyes. Arkema is a Hamilton graduate who could easily be mistaken for a Colgate undergrad, and Waage is from Norway. In regards to his training at an elite Italian school, he simply said, “I graduated from the school of Bologna.” All three met at Ecole International de Theatre Jacques Lecoq; each one was drawn there by their love for theatre.

The New York Times claims that Waage, Arkema and Warnock may just be geniuses. Quite a few Colgate students received the privilege of studying under these “geniuses” when the Wakka Wakka crew came as guest lecturers to the Theater 350 Acting Workshop. Like other talented actors before them, brought to campus by Adrian Giurgea, Director of the University Theater program, the team showed off their talent for a variety of wowed students. The first day commenced with a warm-up designed to loosen up the body until it had reached a state of semi-human gelatinous material. Then they covered the art of the tableau, which involves making a scene using strictly one’s body and confining action into a small space, all whilst maintaining its order and function. The Wakka Wakka team was receptive, eager, excited, and constructive. They were tortuously fastidious about postures, positioning and every single movement. They left quite an impression on the theater students.

While some might shirk from a task as daunting as breathing life back into Isben, the Wakka Wakka company revels in their ability to transform a lost biography into a brilliant, culturally applicable piece. This play was a testament to the creative process and from start to finish, a thing of inspiration. Ibsen couldn’t be anything to believe but proud.