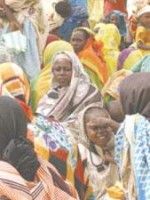 On Sunday, a bus full of Colgate community members left Hamilton for New York City, where they participated in the Save Darfur Rally in Central Park alongside a Syracuse resident who experienced the situation in Darfur first-hand.

The Save Darfur Rally took place in multiple cities concurrently, bringing a single voice to the thousands of victims from the Sudan currently living in a state of genocide.

Unique to Colgate’s experience at the rally was a personal perspective on the situation in Sudan: Dominic Mathiangh, a refugee of the genocide who currently lives in Syracuse, attended the event with the Colgate group.

Mathiangh became acquainted with Colgate through the company he works for, which produced the t-shirts that Colgate students wore to the rally.

Mathiangh was kidnapped at the age of eight and escaped to refugee camps shortly after his capture. He is now attending community college and has recently contacted his mother in Kenya, who struggled with believing that her son was in fact alive.

He shared his story on the trip, which stood out to those who attended it as a particularly poignant part of the day.

“It was really amazing to hear his story and to be able to put an actual face to the situation,” junior Ceci Sibony said. “It made the rally more real.”

“It was really nice to see all the youth because obviously we are the people who will be making decisions within the next 10 or 20 years and will be the ones in power,” first-year Maggie Donin said. “We can make a difference, especially as a group.”