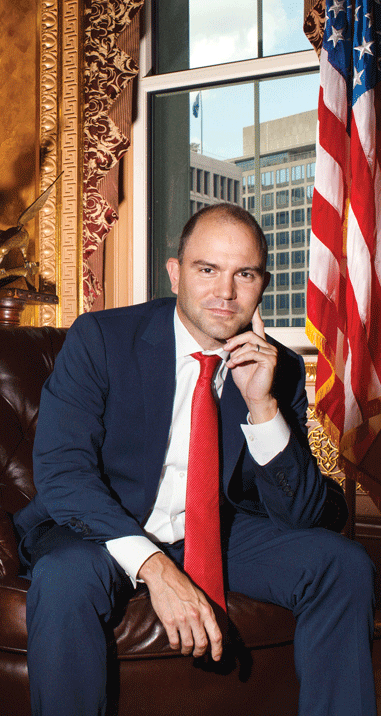 On March 19, the College Democrats hosted a question and answer style discussion with Ben Rhodes, former Deputy National Security Advisor and Foreign Policy Speechwriter under President Obama. The event, titled “The World As It Is: Ben Rhodes Talks Global Events, Speechwriting, and What Comes Next”, took place in Love Auditorium.

Ben Rhodes began working for Obama’s 2008 presidential campaign after quitting his job at 29 years old, launching him on an influential political path. Rhodes transitioned from foreign policy speechwriter to deputy national security advisor, eventually becoming a close collaborator with Obama. He was instrumental in facilitating conversations that lead to the re-establishment of diplomatic relations between the United States and Cuba.

Rhodes began working as a political commentator after his work within the Obama Administration. He contributes to Crooked Media, NBC News and MSNBC. In 2018, he co-founded National Security Action, an organization of former government representatives who work on foreign diplomacy. Rhodes also serves as co-host of the foreign policy podcast “Pod Save the World.”

In 2018, Rhodes released his memoir, “The World As It Is,” which captured all of the defining moments of his near- decade run with President Obama. Greg Pecker of The New Yorker called it “the closest view of Obama we’re likely to get until he publishes his own memoir.”

Rachel Smith, Vice-President of the College Democrats, said she was incredibly happy Rhodes was able to come to Colgate and engage in conversation with Colgate’s political thinkers.

“Ben Rhodes’ experiences negotiating with the Castro’s for a thaw in diplomatic relations was very eye opening, and shows the complexity and patience required to change a relationship as tense as that of the US and Cuba. If one compares Rhodes’ experience against the publicity stunts President Trump has participated in with Kim Jong-un, it is much easier to understand why relations have not changed between the US and North Korea,” Smith said.

“I thought Rhodes offered a fascinating overview of his rather unusual experience with President Obama, which combined speechwriting and communications work, high-level substantive policy responsibilities on subjects like Cuba and Iran, and a close personal relationship with the president. Both at the event and in a subsequent dinner with students, he was refreshingly candid in his observations on contemporary foreign-policy concerns and the state of Democratic debate on them,” Rosenfeld said.

Glynnis Harvey, President of the College Democrats, said she was pleased with the outcome of the event.

“Hamilton, as many small rural villages do, can feel isolated from the rest of the world. Despite this, the world is ever-changing and fast paced,” Harvey said. “We wanted to create a conversation on campus about foreign affairs and thought Ben Rhodes would be the perfect speaker to do that. His wit, candor, and smarts elevated the conversation and I think produced an enjoyable event.”