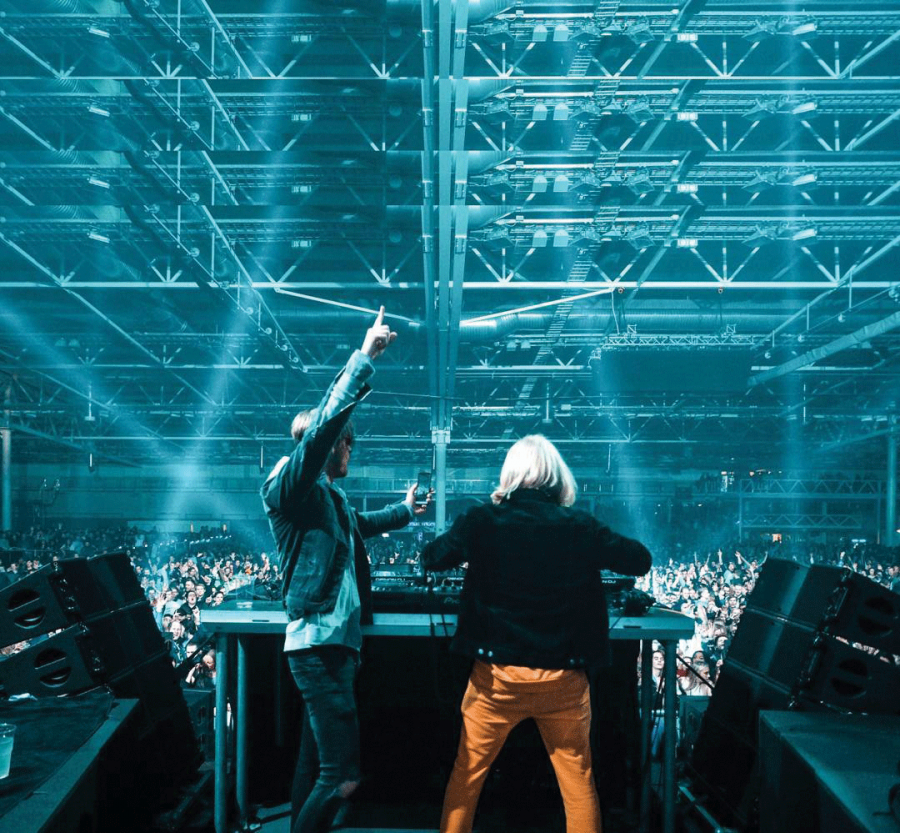 On Friday, April 12, Norwegian DJ duo KREAM performed a concert in a tent behind 92 Broad Street. The SPW kickoff performance was co-hosted by Phi Kappa Tau, the Blue Diamond Society and Brothers.

KREAM members Daniel and Markus Slettebakken are brothers originally from Bergen, Norway. Their most popular song, “Taped Up Heart,” hit 22 on Billboard’s Hot/Dance Electronic Songs in 2016. Amid a weekend jam-packed with entertainment, the event certainly stood out in terms of student turnout and excitement.

KREAM was a relatively unknown name among students, and yet through pouring rain and dismal weather, enthusiastic concert- goers thronged by the hundreds to the performance. The crowd consisted of a diverse spread, with all class years represented. Musical guests are traditionally a core feature of Spring Party Weekend, however, in recent years attendance at concerts has decreased due to the low profile of the performers and somewhat unconventional choices of venue.

To gain entry, students had to either show an event pass or their GateCard. The event pass could be easily downloaded off the Get Involved website and added to one’s Apple Wallet. Once inside, the organizers made sure no one went hungry by providing food from the Hamilton Eatery. Students flocked toward the food at the back of the tent, eager to eat their fill before dancing to electronic music.

A local DJ, Phi Tau’s ANSTEN, opened the show. During this time, attendees flitted in and out of the event. Due to the relatively bright lights and quiet music, students didn’t find the concert immediately enjoyable.

After the hour-long opener, the stage remained empty for a few minutes. The crowd of students, frustrated by the long opener and lack of KREAM, resorted to several chants of “We want KREAM” and even a quick stint of booing. Brothers Daniel and Markus Slettebakken finally emerged on stage just before 10 p.m. to roaring applause. What followed was a bass-filled, beat-dropping, altogether rowdy collection of popular club song remixes. The varied set included remixes of well-known pop songs, most notably crowd-favorites “Mo Bamba” by Sheck Wes and “Woah” by Post Malone. Strobe lights flashed from above, and the crowd bounced and boogied down below. Throughout the night, the DJs shouted into the microphone with strong Scandinavian accents phrases such as “Are you ready to party, Colgate?” to pump up the crowd.

The responses to the performance were a bit of a mixed bag, with some attendees having a somewhat lukewarm reaction, as first-year Paulina Prosnitz noted.

“The mac-n-cheese was definitely my favorite part,” she said.Other students, however, thoroughly enjoyed the lively performance. “I normally don’t like EDM, but KREAM was pretty lit,” first year Jeffrey Stewart said. Fellow first-year Liney Haigood reaffirmed this sentiment. “Even though we didn’t know who the DJ was, the students definitely left more excited than they came,” she said.