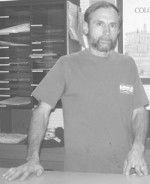 When walking past Huntington Gymnasium’s equipment room, affectionately known as the “Cage,” Athletic Facility Assistant Ron Blackmore is a common sight. He ubiquitous on campus, striving to improve Colgate and the community at large.

Blackmore attended Denison University in Ohio, where he received a Bachelor of Arts in biology. He completed school in three years and then obtained his Master’s Degree in soil science from Syracuse University.

“I like being outside and soil has always fascinated me,” Blackmore said. “I like to get my hands in the dirt.”

After his brother graduated from Cornell Veterinary School, he enlisted Blackmore’s assistance in opening a veterinary practice in Madison County. Blackmore worked there for one year and then continued soil consulting while working at Colgate during his summers and weekends off.

However, after getting married and having children, he wanted more stability and began working full-time at Colgate as the athletic facility’s assistant.

Blackmore is responsible for coordinating the intramural recreation program and staffing the equipment room, handing out sports gear and keys to the various athletic facilities.

He also works with the community. A program initiated several years ago allows community members to purchase membership to Colgate’s athletic facilities. It is this interaction that is a facet of the job Blackmore finds particularly enjoyable.

“I can really relate to student athletes and how hard they work,” Blackmore said, “Getting a job in the athletic department sort of tied in with my own interests because I was an athlete too.”

In fact, Blackmore has been running for 38 years, having led his high school team to the State Championships. He even qualified for the Olympic Trials in 1976.

“It was a good experience,” he said, “and sort of capped my career in marathons.”

Blackmore currently enjoys running long-distance competitions and in 2000 was a member of a Colgate team that finished fifth in the Chase Corporate Challenge in Syracuse. For the past 30 years, his running club has been the Syracuse Chargers Track Club. He has since joined a more competitive club,the Genesee Valley Harriers, which he runs with during the cross country season. This year they placed third in the USA Track and Field 10 KM Masters Cross Country Nationals.

“I train as hard as I ever did, though it’s a lower level than college competitions,” he said. “I like cross-country running because I enjoy being outside.”

For Blackmore, running is not just a means of keeping in shape, but also a “moral” activity.

Blackmore was brought up during the late 60’s and early 70’s, which he described as “pretty active years in terms of the environment.” He thus became very active in environmental causes and is currently a member of six or seven national groups.

Blackmore was also the founder of the ecology group on campus.

“It’s a way of getting together the top administrators, the staff and also the students to discuss environmental issues,” he said. “It’s broadened out to tie into other environmental efforts.”

Some of these efforts include trying to make the campus ecologically aware by adding better recycling and trash facilities in the student apartments, and using more energy-efficient light bulbs in the reading areas of the library.

Blackmore has done his own part in increasing Colgate’s effort to conserve energy by personally replacing the orange stickers in classrooms that state “please shut off lights when leaving” when they become illegible or are removed.

“There’s so much going on here,” Blackmore said, “I am always going to lectures. The great advantage of being here is the accessibility.”

Blackmore has also audited a few science classes during his career in order to obtain “intellectual stimulation.”

Blackmore is looking to continue this stimulation by possibly volunteering for the Peace Corps or another environment organization, such as the Earthwatch Institute, after he retires.

“There are so many areas in the world that are devastated by overpopulation and overuse of the land,” he said, “so I’d like to devote some of my professional talents to helping. I think they may have use for a former soil scientist-runner in some environmentally degraded place in the world in need of sustainable forestry and agriculture.”

Blackmore hopes to make some sort of difference in the world.

“At some point you feel like you want to get out into the world and do something to better it,” he said.