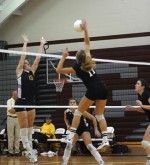 It was a weekend full of excitement on Cotterell Court for the Raider volleyball team. Two of the Patriot League’s finest teams paid visits to Hamilton to take on Colgate. Both teams expected to return home victorious, but only one escaped with a win.

The first match of the weekend pitted Colgate against American, the Patriot League frontrunner. This was the second match between Colgate and American this year, with the first resulting in a sweep by the Eagles. At that point, however, the Raiders were struggling immensely and were nothing more than an afterthought for the perennial power. But Colgate has had a revival as of late, and brought a respectable 3-4 Patriot League record into the match.

Unfortunately for the Raiders, American proved to be too powerful, sweeping the match in impressive fashion, 30-22, 30-24 and 30-16. The scores, however, are a bit deceiving. All three games were evenly contested early, but late American runs provided for the significant margins of victory.

Leading the Raiders on offense was first-year hitter Katrina Zawojski, who totaled 10 kills and nine digs in the match. Sophomore Sheila Giovannini, who amassed eight kills, and senior co-captain Allie Nichols, who had 22 assists and three kills in the loss, also impressed the home crowd.

In the second match of the weekend, Colgate took on Navy, a team that defeated the Raiders, 3-1, in the Patriot League opener.

“We were determined to beat Navy on our home court, with the emphasis being on winning, not losing,” Nichols said.

A lot has changed since the first match, as the Midshipmen were quick to find out. The Raiders, as they have a habit of doing, jumped off to a tremendous start. After falling behind very early in game one, they went on a 14-3 run that broke the game open. During that stretch, Zawojski served 11 consecutive points to give the Raiders a 15-7 lead. Navy stormed back, pulling to within one point, but it was not enough, as Colgate won, 30-27.

Feeding off the momentum, the Raiders dominated the second game, winning 30-18. Navy fought back fiercely, taking the third and fourth games, 30-23 and 30-17, respectively. That forced a deciding game five, the first such occurrence for Colgate this season. Instead of succumbing to the pressure, the Raiders rose to the occasion and thrived, dominating the game by a score of 15-1 to secure the upset victory.

Defensively, first-year Jackie Adlam continued her brilliance, totaling 30 digs in the match, bringing her to within 15 of Natalie Rawson’s Colgate single-season record.

With the win, Colgate improved to 4-5 in Patriot League action, while Navy dropped to 6-4. The Patriot League Tournament seemed like an impossible dream earlier in the season, but with their greatly improved play, the Raiders now have a realistic shot at the tournament.

“Now that we know that the Patriot League Tournament is in our reach because we’ve proven we are good enough to go, it’s going to be easy to psyche ourselves up for the upcoming matches,” Nichols said. “Our confidence is high right now, but not to the point where we don’t think we have to keep working on improving everyday. Our focus is so in sync and we are all on the same page and we know what is needed and expected of us in the next few weeks.”

In critical Patriot League matches, the Raiders return to the court tonight at 7 p.m. against Army at West Point and once again at Holy Cross tomorrow afternoon.