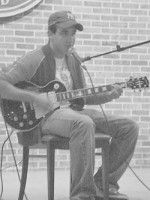 The prospect of one, common language seems impossible when one thinks about the overwhelming and eclectic world of different alphabets, accents and pronunciations. Music, however, comes closest to achieving this level of universality. From dancing at clubs, running at the gym or seeking emotional emphasis in films and plays, the list of ways that music takes a prominent role in our lives is countless.

It is evident that music is an important element in all aspects of a Colgate student’s life. iPod earplugs can be spotted almost anywhere, and there is certainly never a lack of late-night dance parties to attend. Many students have taken these musical interests to the next level by investing their talent into establishing and performing in on-campus student bands.

Student bands at Colgate perform gigs at parties and local places in town when they are not practicing in the Dana Arts Center or a basement of one of the Broad Street houses. For a liberal arts school of approximately 2,800 students in upstate New York, this is a very popular extracurricular activity.

The student band Loincloth is composed of four members, seniors Tim Hogarth, Chris Lawnsby and Kassie Kallin and sophomore Chris Jospe. The band has played at several catered parties, at Donovan’s Pub and it even played a three-hour long show at Nichols and Beal. According to Hogarth, their favorite performance was at the Drag Ball, which featured drag queens who helped make the night enjoyable and memorable.

Since his days of playing the saxophone, guitar and clarinet back in the fourth grade, Hogarth’s favorite music has been a mix of metal, hard rock and pop/punk. He even dabbled in a few jazz band concerts in his younger years. His favorite bands include Fall Out Boy and Megadeth. Hogarth enjoys practicing and performing with his band, commenting: “I play with Loincloth ’cause we cover what’s important.”

“In high school and college (early ’90s), I listened to the Smiths and Morrissey,” Robertson revealed when asked about his favorite bands. Although he suggested that some readers may not recognize some of his other favorites, those whose musical history is varied and antiquated will remember the bands Guadalcanal Diary, Too Much Joy, Pop Will Eat Itself and Soul Coughing.

Kraly’s favorites include Tower of Power, Cream, The Allman Brothers and The Derek Trucks Band. Frey referenced some of the bands at the top of his list: Radiohead, The Sex Pistols, Green Day and Violent Femmes.

On a weekly basis, the three men meet at Frey’s house for practice (they add that “we should thank Frank’s wife for putting up with the noise”). Although downtown Hamilton’s scene is “very limited in its scope,” they have played at many student functions, which they attest to being their favorite audiences, as well as at the Jug and Nichols and Beal.

When asked to discuss their goals and future aspirations, Frey simply stated that “perhaps someday” he would consider a profession in the world of music. Robertson explained that, although he did have a professional dream at one time, he did not have the courage to pursue it, so he just stayed in school “until there was no other degree [he] could get and they said [he] had to leave. Now, any music profession will have to be strictly a distribution deal or songs in TV shows or movies.”

Kraly explains how he lives vicariously through his son Geoff, a professional jazz and rock musician in New York City. He humbly adds that he is sadly “totally lacking in youth, courage, good luck and talent.” Although these traits are sometimes important characteristics of the profession, students at Colgate would unanimously attest to the fact that there is talent in these three.

According to sophomore Dave Goodrich, former member of an on campus student band, “the best things about making music are the moments when everything clicks and you have four or five guys pushing each other to a higher level.”

Goodrich appeals to the idea of a strong group mentality, with emphasis on diversity. “Music is diversity; when a musician brings his own vibe to a group and everyone else is adding something different, you can feel what it’s all about.” According to Goodrich, thanks to the endless talent and spirit found in Colgate students, it does not take long to find a group that fits.

Even though upstate New York does not exactly have a “thriving music scene,” Goodrich’s band had the opportunity to play at a couple fraternities during Spring Party Weekend, a rally at the Delta Kappa Epsilon (DKE) house and a few shows at the Edge Caf?e as well.

When asked if he would ever consider it as a profession, Goodrich explained that the decision is tough and that there is a difficult road ahead for those that wish to pursue the life of a musician.

Between practicing in basements and dealing with the lack of performance opportunities, the life of a student band member can also be tough. Nevertheless, they love what they do, and it shows.