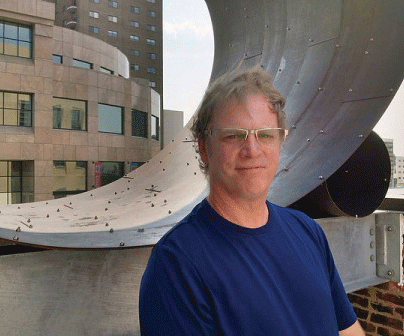 Hancock Commons and Dewitt Godfrey, Associate Professor of Art and Art History, hosted a speakeasy titled “What is Art For?” on Thursday, April 18. The night kicked off with the important question: What is art for? The answers from the students and faculty ranged from protest to aesthetic beauty.

“Art is a word that is too broad to really mean much anymore,” Godfrey, who has a background in sculpture and public art, said.

The evening was an opportunity for students and faculty to come together in their appreciation of art.

“I think the talk was great. I’ve never been to an event like this on campus and it did a great job providing an alternative venue for students to socialize. I appreciate that it was a discussion about art because that’s not something that happens very much,” senior Leiya Salis said.

The tone of the discussion shifted when Colgate 1987 graduate Ken Landauer’s piece “King” was mentioned. “King” is a piece of public art that features a neatly-made bed with pristine sheets encased in a transparent box. Godfrey told the people present that Colgate was considering placing “King” somewhere on campus. This news was met with disapproval from a majority of those present as they felt that “King” could be representative of rape culture and Colgate’s own troubles with rape culture.

“The point of contention came not from maliciousness, it came from naiveté. It came from people who don’t really have to experience sexual harassment on a daily basis, so they are more academic and abstract in their conversations about this serious issue. For a large percentage of people on campus, this is a personal experience,” senior Madison Smith said.

Landauer had told Godfrey that the purpose of the piece was not to discuss sexual assault or rape culture and that he’d never considered those experiences when making the piece. However, once Godfrey told Landauer of the pushback to his work, Landauer became aware of the possible connections. Godfrey said that Landauer supported the display of his work on campus if it could start a conversation.

The night ended with the question of what kind of art gets shown, and who gets to choose it on a campus like Colgate.

“With the big survey about sexual assault, the HEDS survey, there was a panel of people that then talked about it, discussed it and worked on how to fix [sexual violence] on Colgate’s campus. [The panel] had faculty, staff and it also had students, all of whom were involved and able to put in a lot of time, commitment and concern for the cause. I think that that was really productive. Why not expand that to the art that we bring to campus?” Smith said.