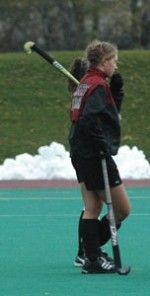 More often than not, when given a lead with less than five minutes left in a game, the Raider field hockey defense can be relied upon to preserve the victory. Last Saturday afternoon did not follow that script, however, as the Raiders lost to Lehigh, 3-2 in overtime, despite having held a lead throughout the majority of the contest. We all know what happens when you assume, however; the loss just about eliminated the Raiders from the upcoming Patriot League Tournament next month.

Looking to salvage its season, the Colgate offense came out with authority and played with passion and intensity. The Raiders dominated on offense, registering 14 shots and 10 penalty corners against the Mountain Hawk defense. Sophomore forward Lauren Remkus attributed this success to the Raiders’ aggressiveness.

“We went out strong in the first half and never gave Lehigh time to challenge,” she said.”We passed the ball with speed and were aggressive in the circle.I think we were able to dominate because we played our type of game.”

First-year Lauren Carey and sophomore Natali Plesniarski were involved in the attack and both scored their fourth goals of the year, just three minutes apart, to stake the Raiders to a 2-0 lead. Meanwhile, the Raider defense kept right with the offense and limited Lehigh to two shots and only one corner in the entire first half.

Improving upon what head coach Cathy Foto called a “flawless first half” would have been difficult; therefore, all the Raiders had to do was keep up their level of play. The team succeeded in the opening moments of the second half, but then the momentum shifted permanently to Lehigh. Off of a penalty corner, Lehigh’s Marissa Iannarone scored to cut into the Raider lead. This wouldn’t be the last we saw of her. Seemingly angered by the loss of a shutout, the Raider defense subsequently picked up its play. Lehigh was unable to mount any further attacks until very late in the game, when Christy Smith beat junior goalie Jacque DeMarco with less than a minute left to tie the game.

“There is no doubt in my mind our kids wanted to win, but inexperience got the best of us,” Foto said. “There are a lot of little things that can be done to preserve a lead and I am not sure we understand how to do that just yet.

“Defensively, we are aggressive and pressure the ball, but don’t quite understand how to play with the poise that is needed to maintain control of the ball. That only comes with experience and we certainly learned that.”

With the game tied, the teams needed an overtime period to decide the outcome. After many shots were traded back and forth and both teams were left fatigued, Iannarone got the ball, made her move and ended the game.

“What is toughest to handle, I think, is the fact that we have led at the half in three PL games and lost all of them,” Foto said. “We are not good handling the pressure that teams are putting on us when we are ahead. The other team is basically desperate and taking lots of chances and we need to step up and maintain composure and confidence, which comes with being ahead.”

Just like that, the Raiders’ hopes at the postseason were thwarted. The loss dropped the Raiders to 6-10 overall, 1-3 in the Patriot League, and most discouraging of all, still with a winless record on the road. The Raiders were snowed out on Tuesday evening and will not make up their game against Albany, meaning that the Raiders have one game remaining in the season, a match-up against undefeated and nationally-ranked American tomorrow in Maryland.