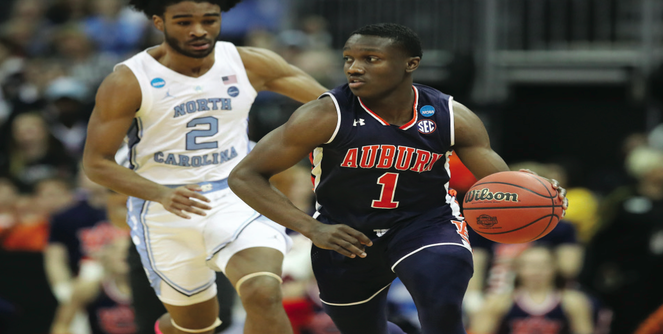 The No. 5 seeded Auburn Tigers are in the Final Four for the first time in program history—an improbable run that no one saw coming.

Auburn University, a school known for its strong football program—and certainly not its basketball program—has shocked much of the nation on its run to the Final Four. Their tournament began with a nail- biter one point win against New Mexico State that could have easily ended their hopes in the Round of 64. They went on to beat Kansas handily, then defeated arguably the best regular season team in the country in North Carolina and finally beat Kentucky, an SEC foe who had already beaten them twice this season (the last time they faced, they lost 80-53).

Only one team in NCAA tournament history has beaten these three blue chip programs in the same tournament: Arizona did it in 1997 and went on to win the national title. This is an impressive feat to say the least, as these three programs are dynasties led by three of the best head coaches in college basketball.

Auburn was slept on for much of the year. However, this was a team that topped out at seventh in the AP poll this season and won the SEC tournament, one of the top conferences in college basketball.

Bruce Pearl is a big part of the Tigers’ success. He began coaching Auburn in 2014 after leading a successful Tennessee program to a 145-61 record over six years. Before Pearl, Auburn had made the NCAA tournament just once this century and had just four winning seasons over that time span. Pearl turned the program around, increasing win totals each season and recruiting elite talent, which culminated in this season’s 30-9 record, SEC title and Final Four berth.

When you watch Pearl coach, you may notice that he looks like a bona fide psycho- path. It is quite entertaining to watch. He is constantly screaming at his players, face red with anger, and throwing his hands up in disgust with the referees. But, he’s effective at what he does. His players listen and execute.

This Auburn team can go out and play. They had the sixth best adjusted offensive efficiency rate in the country and they are a high tempo team. They rely heavily on the three ball and shoot it effectively. They at- tempted 30 three-pointers a game through- out the season, fifth most in the NCAA. They also make them at a high percentage, shooting 37.8 percent from beyond the arc, good for 32nd in the NCAA.

Auburn has been plagued by the injury of one of their best players Chuma Okeke, who they lost to a torn ACL in the win against UNC.

Okeke was a huge part of this team, but the Tigers rallied around him as he sat in a wheelchair on the sidelines in Sunday’s victory.

But Auburn can win without Okeke, as they showed agaisnt Kentucky. The Tigers have a bunch of players who love to compete. Guard Jared Harper is one of the quickest players in the tournament, standing at just 5’11”. He blew by Kentucky’s guards and was almost unstoppable on the drive. Harper had 18 points against Kansas, nine against UNC and 26 points against Kentucky. Senior Bryce Brown has also been key to Auburn’s success. The guard averages 16 points a game and contributed 24 points in the win against Kentucky. Brown dubbed himself and Harper the “best backcourt in the nation,” after they took down the Wildcats.

On April 6, Auburn faces Virginia in the Final Four, a team who defends well and likes to slow down the game. It will be interesting to see how the two styles clash, but Auburn will come out firing and ready to compete for 40 minutes. Look to see a little extra fire in the Tigers, who are in their first Final Four ever, and rallying around their injured teammate.