Volleyball Gets First Win of the Year 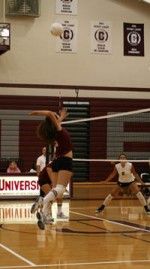 The Football Team may be the most popular sport on campus this fall, but the volleyball squad is the most prolific. We are just three weeks into the school year, yet the women have already played nine matches, including the Colgate Invitational this past weekend. Thus far, it has been a tough season for the team: as the Raiders have amassed a 1-8 record, but they have improved as of late and look to continue the progression.

Following a home loss to Binghamton in their first game of the season, the Raiders headed to the Western New York Tournament where they faced off against Niagara, Buffalo, and Canisius. These contests did not go well; Colgate won just one game in the three matches. Following a mid-week loss to Siena, the Raiders returned home to Hamilton to host the Colgate Invitational, a tournament that featured Princeton, Providence, and Fordham.

In the first game of the Invitational, the Raiders played Fordham. Things in the beginning looked promising for Colgate; they won the first game 30-24. Down early, the women fought back. They were led by sophomore Erin Kanetzke, who played well throughout the game, serving the final three points to seal the victory. The final three games of the match were all close, but the Rams ultimately pulled away in three, taking the match 3-1.

In their second game of the tournament against Princeton, the Raiders fell behind early and never recovered. The Tigers controlled the match, winning 30-23, 30-25, and 30-21. First-year hitter Katrina Zawojski led the Raiders with 13 kills and seven assists, while senior Allie Nichols contributed 18 assists. First-year Jackie Adlam was impressive on defense, racking up 24 digs.

In their final game of the tournament, Colgate finally broke into the win column. Having entered with an 0-8 record, Providence College, like the Raiders, was desperate for a victory. Colgate jumped out to a fast start, totaling a .360 hitting percentage in a first game victory. Following a tightly contested second game in which the Friars won 31-29, the Raiders dominated the final two games on their way to the win. Zawojski led the Raider attack, totaling a career-high 19 kills along with nine digs and eight assists. Sophomore Sheila Giovannini also had a spectacular night, as her 18 digs and .459 hitting percentage contributing to the big victory. On defense, Adlam amassed a career-best 33 digs.

Adlam was the lone Colgate representative on the all-tournament team. Fordham’s Marija Markovic was named the tournament’s Most Valuable Player.

Following the excitement of the Invitational, the Raiders traveled to Binghamton on Tuesday for a rematch of the season’s opening contest. As in the season-opener, Binghamton cruised to a 3-0 match victory. That final score is deceiving; for every game was closely contested. In the first game, Colgate vaulted to a 31-30 lead and looked poised to take the lead, but the Bearcats fought back, winning the final three points to take the game, 33-31.

The second game was another tight one, but a late run by Binghamton sealed the 30-26 victory. The final game was a d?ej? vu, as the Raiders played well, but lost 30-26 again.

Zawojski led the team in kills once again, totaling a match-high of 15. Senior Allie Nichols added 31 assists, while Adlam recorded a match-high 17 digs.

The Raiders have struggled in the first few weeks of the season, but there is certainly reason for optimism. The team is extraordinarily young, consisting of six first-years and three sophomores and with only one junior and two seniors. Even this early in their Colgate careers, the young players have been impressive and will continue to progress. The Raiders will continue their busy schedule this weekend at the Cornell Tournament in Ithaca, where they will play Butler, Cornell, and La Salle.