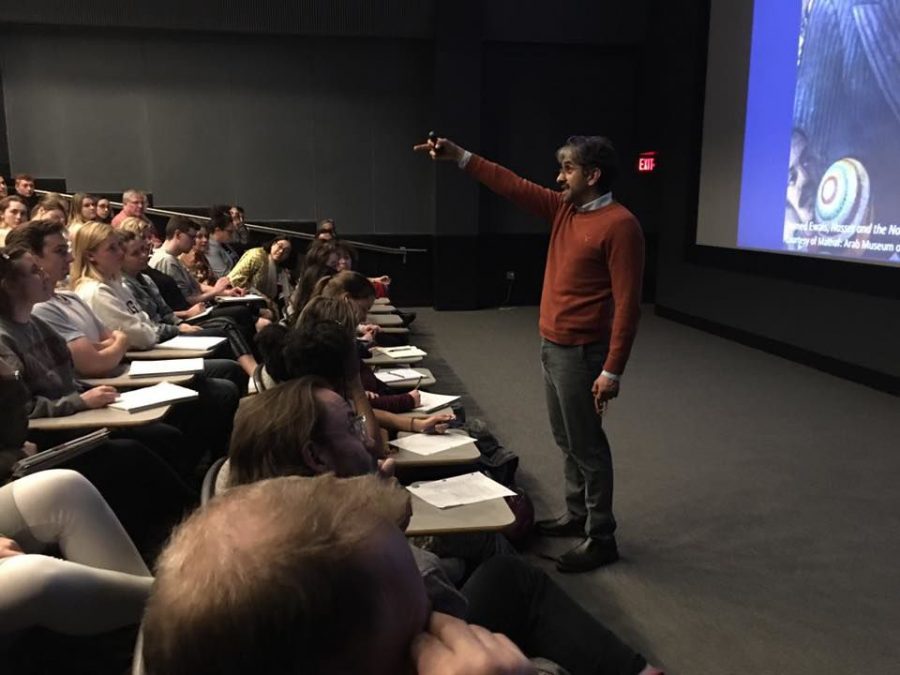 Sultan Sooud Al Qassemi visited Colgate from Yale University to discuss how politics and art interact in the Middle East.

In 2010, Al Qassemi founded the Barjeel Art Foundation, an independent art initiative that works to democratize access to and representation in Middle Eastern art. His private but publicly accessible collection in the United Arab Emirates represents artists who are often overlooked, such as women and minorities.

In his talk at Golden Auditorium, Al Qassemi presented dozens of works of Middle Eastern art, using them to teach about political movements in the Middle East.

He also worked to engage audience members, asking for both historical knowledge and analytical observations about the art to progress the lecture.

“I found his fast-paced lecture to be a fascinating display of how art and politics in the Middle East are in a constant conversation with each other. Given [Al Qassemi’s] background, the topics he chose, including criticisms of the GCC [Gulf Cooperation Council], were made all the more interesting,” von Furth said.

Al Qassemi discussed the global outrage at the 1937 “degenerate art” exhibition in Munich designed to diminish art movements like Dada and Cubism in favor of high German art. What resulted was a global display in defense of artistic freedom and representation, including a surrealist movement in Cairo called the Art and Liberty Group. In a region with low political freedom, groups like the Art and Liberty Group served as pseudo-parties, allowing intellectuals to freely organize and discuss their work and political ideals. In this way, art created a space for the intellectual elite to mobilize.

First-year Ellie Lawrence attended both the lecture and the Sultan Sooud Al Qassemi Engages Audience in Discussion of Middle Eastern Art breakfast with Al Qassemi. “I loved having the opportunity to sort of ponder all the art and information we took in during Al Qassemi’s talk, and then the next morning being able to go to breakfast with him and discuss the little things we found particularly interesting or wanted to know more about,” Lawrence said. “Sultan was so energized and excited about the art and that really came through in his talk, so to be able to hear more of his own thoughts and ideas at breakfast was incredible.”