In the Light: Ram Parimi 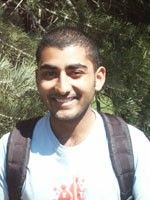 For our final edition of The Maroon-News, we chose to spotlight someone whose face is familiar to everyone on campus as President of SGA. Ram Parimi, a Taurus and a vegetarian from Palo Alto, California, started his political career at Colgate as President of Class Council his junior year. Ram decided to join after working with the show Gateline on CUTV. “I got involved with Gateline and saw us making fun of a lot of events on campus. I realized that instead of making fun of them, I could actually spend some time trying to fix them. So, I got my foot in the door, and decided to run for President because I felt that I should spend as much time as possible impacting the lives of 2,800 great people.”

Ram also served as Chairman of the Legislative Affairs Committee for Senate before becoming SGA President. As President of SGA, Ram has accomplished a great deal, including Welcome Back Week, improving the Cruiser schedule, working to get rid of the swim test and creating a fractional credit system. Most importantly, because of Ram’s hard work, Curtis and Drake halls will get hand dryers next year. Ram credits his “amazing Executive Board and wonderful Senators” for all that he has accomplished as President. Ram is well-aware of the many issues confronting Colgate students. He believes that Broad Street and the library transition will be the two biggest concerns facing next year’s President and Vice-President.

In addition to his large role in student government, Ram sings with the Colgate 13. He was Treasurer from 2002-2004 and describes the experience as amazing. “I got to understand the finances of the group and the business aspect of one of Colgate’s greatest traditions. It has opened up so many doors for me and allowed me to perform at some of the coolest places in the country.” Despite his work with the 13, Gateline and SGA, Ram believes his greatest contribution to Colgate has been his work as a squash teacher. With regards to those he has taught, he reminisces, “They were little lads earlier, and now they are squash phenoms.”

Although Ram loves Colgate and has the student go-getter attitude, his least favorite aspect is that you need to get people to come to events by providing free food. “How does one slice of pizza make you enjoy an event that much more?” Ram asks. Leaving Colgate, Ram says he leaves “with an amazing group of friends and an ability to inspire and be inspired by everyone around me.”