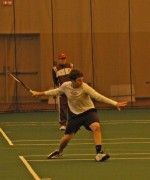 It was a tough weekend for the Raider men’s and women’s tennis teams as both squads lost matches to Patriot League opponents by the score of 5-2.While the women traveled to Bethlehem to play Lehigh, the men stayed at home to square off against league favorite Army. Before the match started the men were pumped up for this contest, as the team knew that if it played well, it could win the match.Army managed to pick up the doubles point, but only after three grueling doubles matches. The Raiders pulled out the first doubles match, but could not find another victory in the second or third doubles spots.Although the Raiders lost four of the six singles matches, the home team still gave Army a tougher match than expected.At first singles, senior co-captain Reed Hagmann easily blasted past Patriot League rival John Houghton in straight sets, 6-2, 6-4. Junior Jake Heims played a great match at second singles but the Paradise Valley, AZ native lost a tight second set, as it was obvious that his broken left wrist has not yet fully healed.Sophomore Chris Innes played what head coach Patrick Fisher called his best match of the year, trouncing Army’s third singles player in straight sets, 7-5, 6-4. Innes will be a key part to this team’s success in the Patriot League and the Southport, CT native is stepping up to the challenge.At fourth singles, senior co-captain Pete Oman won the first set, 6-3, but dropped the final two sets, 3-6, 1-6, in a tightly contested match. First-year Mickey Gallagher lost the first set of his fifth singles match, 2-6, but then roared back to win the second, 7-5. Unfortunately for Gallagher, the comeback fell short in the third set, as he fell, 1-6.First-year Tyler Deck rounded out the matches at sixth singles by losing in two close sets, 5-7, 2-6.By looking at the scores, including two three-set matches and many close two-setters, one could see that the Raiders, who were predicted to finish fifth in the Patriot League, clearly gave the favorites a fit all day. The Raiders played inspired tennis from top to bottom and they will need more of the same in the upcoming weeks.”I just told the guys that one or two points really determined the outcome of a lot of these matches,” Fisher said. “We can definitely beat Army and we showed today that we can handle the best in our league. Everyone played their hearts out and I am proud of every player on this team. “We are definitely going to see Army again in the Patriot League Tournament and I know that every one of these guys is looking forward to that match.”The Raider women met a similar fate on Sunday, as they lost at Lehigh by a score of 5-2.Like the men, the Raider women won the first doubles match thanks to senior co-captain Jamie Maldow and first-year Alex Seaton, but would lose the bottom two doubles matches. The Raider coaching staff was impressed with the intensity with which the team came out, especially since the Raiders were missing their number one singles player, senior co-captain Marissa Alikpala.Even though Alikpala was out with injury, the Raiders stepped up and displayed inspired singles play. Maldow had a tough loss at number one singles, falling 1-6, 4-6, but she fought for every point and did not give up.At second singles, Seaton dominated her opponent, 6-3, 7-6 (4) to give the team its first point of the day. At third singles, sophomore Lindsay Grossman could not get into any rhythm and lost in straight sets.Junior Lilien Vo had an impressive match at fourth singles, winning in straight sets, 7-5, 7-5. Vo played smart tennis and constructed points beautifully in order to get the win.”Lil Vo and Alex Seaton played some spectacular tennis, capturing our two singles victories,” assistant coach Katherine Hatch said. “I was impressed with Vo’s patience and her ability to break her opponent down with long points and a vicious slice backhand. Seaton zoomed through her first set and played a smart second set. I’m continually impressed with Alex’s ability to dig in and win the big points, especially during her tie-breaker.”Senior Ali Grabler had a great match at fifth singles, but she was unable to come away victorious. First-year Lauren Levy played well in her Patriot League debut, but she too fell in straight sets. Nevertheless, the team was optimistic.”Overall, I believe this team has the ability to beat Lehigh,” Hatch said, “and I look forward to a rematch during the Patriot League Tournament.”With the loss, the Raider men’s record fell to 7-15 and 2-1 in the Patriot League. The women’s loss evened their record of 7-7 overall and 1-1 in the Patriot League.Both teams have important Patriot League contests this week. The women play three league games in four days, taking on Bucknell this afternoon, American on Sunday morning and Army on Monday afternoon. The men, meanwhile, face off with Bucknell tomorrow morning and American on Sunday afternoon. All five matches will be played on the home courts of Sanford Fieldhouse.As players from both teams, such as Heims, Alikpala and sophomore Marshall Wheeler, begin to get healthier, both Colgate squads will pose even bigger threats to their Patriot League foes as the league season winds down.