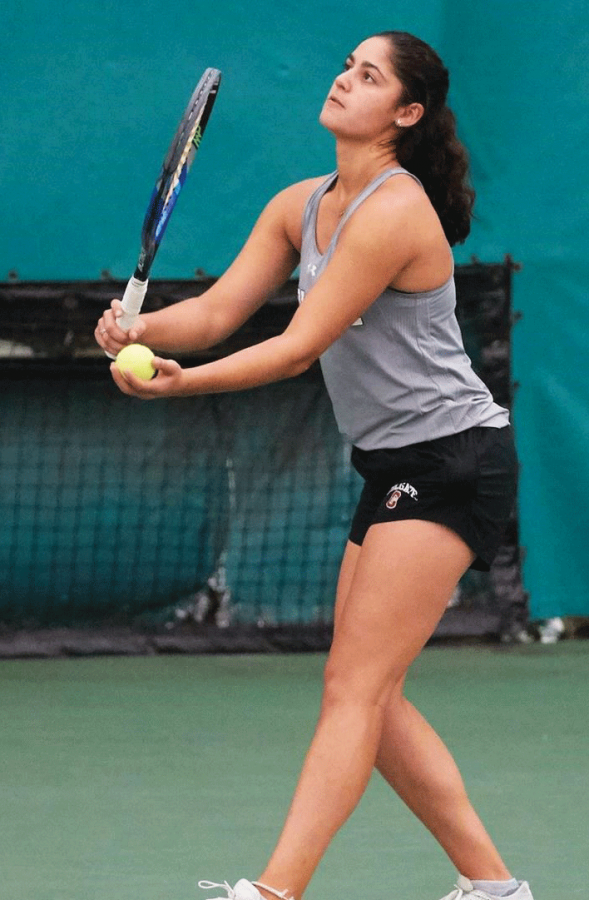 Raiders Lose to Binghamton but Bounce Back Against Rochester

With the last weekend of regular season play before the Patriot League Tournament on April 25 through April 28, the Colgate Women’s Tennis team split their final weekend. The team suffered a close loss on Saturday, April 6 against Binghamton before bouncing back against Rochester on Sunday, April 7, with a dominant win.

On Saturday, the Raiders lost a close duel 4-3 against the Bearcats at J.W. Abrahamson Courts in Hamilton, despite winning the opening double’s team point. Junior Lauren O’Brien and first-year Madi Kiani won 6-2 with sophomore Callie Bar- timer and first-year Ricki Lane winning the other match 6-2, as well to secure the double’s point. O’Brien carried on her strong play into number three singles, winning her match in the full three sets. First-year Nicole Condas won Colgate’s third team point in number six singles in straight sets. This was not enough, though, as Bartimer narrowly lost her match by a 7-5, 3-6, 6-7 final.

“Gritty match today for the ladies being a hair away from the win. O’Brien continued her streak in getting wins in both doubles and singles. Also, congrats to Condas with a clean singles win and Lane for winning her debut in doubles,” assistant coach Jordan Rucks said.

The Raiders quickly recovered in their regular season finale, with a straight sweep in doubles se- curing Colgate all three team points. The doubles teams were sophomore MacKenzie Deeter and junior Jordan Williams, O’Brien and Kiani and Bartimer and Lane. Deeter carried over her momentum into number one singles, winning her match with a 6-2, 6-1 final. Williams continued the strong day for the Raiders by winning her number singles match with a 7-5, 6-2 final. O’Brien was then able to end the weekend undefeated, winning number three singles with a 6-3, 6-7 and 10-5 final. Bartimer won number five singles in straight sets with a 6-0, 6-1 final. Condas also won number six single’s in straight sets, with a 6-1, 6-2 final.

“Great match today for the ladies! We’re ending it on a serious high note with an 8-1 win over a much improved Rochester team. Game ball goes to O’Brien who won her seventh straight match in single and doubles combined,” Rucks said.

The Raiders will next play in the postseason, taking place at Bucknell University in Lewisburg, Pennsylvania from April 25-28. The Raiders ended the regular season with a 5-14 overall record and a 2-4 conference record, but have the chance to start anew come the Patriot League Tournament.

Meanwhile, the Men’s Tennis Team had a bye week. Their regular season will continue and finish this upcoming weekend, April 12 and April 14, with duels against Bucknell and Boston University. Both matches are scheduled to be played at the J.W. Abrahamson Courts. The Raiders last played Bucknell in last year’s Patriot League Tournament, winning 4-2. The last time the Raiders played Boston University was in 2017. The Raiders lost that Patriot League matchup 2-4 against the Terriers. Current Raiders that played during that duel are now-seniors Alec Dardis and Noah Rosenblat and now-junior Kun Tan. Dardis dropped his number six singles matchup, while Rosenblat did not finish his number four single’s matchup. Tan won his number three doubles matchup.

The Raiders will be entering the weekend with a 7-11 overall record and a 2-1 conference record. Both of the weekend’s duels will be Patriot League play.