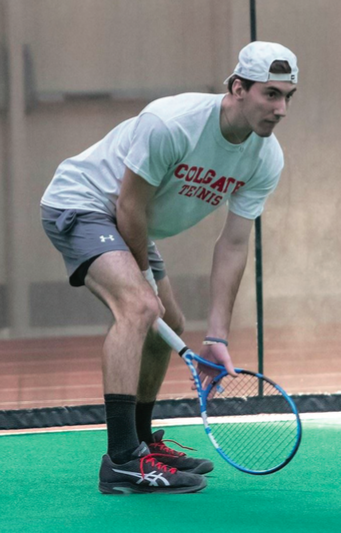 Colgate Men and Women’s tennis teams faced off against the Lafayette Leopards on March 30 at Drumlins Country Club in Syracuse, New York. Both Raider teams emerged victorious, with the men sweeping the Leopards 4-0 and the women fighting back for a 4-2 win.

The men extended their win streak to three, lifting their record to 7-10 and keeping them undefeated in Patriot League play at 2-0. The Raiders started the day strongly, winning all three doubles matches by a 6-2 aggregate on their way to a team point. The doubles partners were sophomores Peter Hartman and Scott Bickel, senior Noah Rosenblat and junior Kun Tan, and senior Alec Dardis and sophomore Tyler Krantz. Rosenblat kept the momentum going, winning number two singles 6-4, 6-2. First-year Rohan Gupta dominated in number five singles on his way to a 6-2, 6-1 defeat. Tan snatched the Patriot League win before the Leop- ards could attempt any sort of comeback with a 6-2, 6-1 tally to clinch the Raiders’ victory. Bickel, Hartman, and Dardis did not finish their respective singles matches.

“[Men’s Tennis has] now won four out of five matches and are tied for first in the league at 2-0. A lot of this has to do with culture and leadership, as having five straight winning seasons is simply not an accident. We had lights out, sharp, sleek doubles today with energy and net play, followed by mature singles with Gupta, Tan and Rosenblat clinching. Bring on arch rival Lehigh!” Head Men’s and Women’s Tennis coach Bobby Pennington said.

The women entered the duel against the Leopards with a 3-12 record and a 1-3 Patriot League record. The Raiders came out with some- thing to prove, quickly winning the doubles points, courtesy of partners sophomore MacKenzie Deeter and junior Jordan Williams, and junior Lauren O’Brien and first-year Madi Kiani, who won their matches 6-4 and 6-2, respectively. Deeter kept her momentum going, winning her opening set at number one singles 6-0, before dropping the final two of a total three-set match. Williams lost too, the Leopards winning in straight opening sets at number two singles. With the Raiders down 1-2, O’Brien needed to rescue Colgate. O’Brien dominated on her way to a 6-0, 6-2 win at number three singles. First-year Nicole Condas then kept the wins rolling with a 6-2 opening set before going on to win a tightly contested 7-6 set at number six singles. Sophomore Callie Bartimer clinched the win for the Raiders with a 6-1, 7-6 straight set victory. Kiani did not finish her match, tied at 1-1 at number four singles.

“In my 13 years at Colgate, that is as proud as I’ve been of a women’s team. We avenged our loss to them last year, which was a big goal for the ladies… There’s three game balls today: Condas for her first win at number six singles, O’Brien for winning both singles and doubles and Bartimer for clinching. That is two huge league wins, and bring on Lehigh to finish our league schedule at 3-3! More please!” Pennington said.