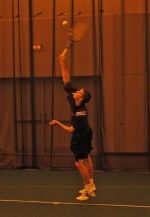 The Raider men and women’s tennis teams came home after a week in Orlando, FL, where both squads finished with records of 1-2 in three matches. Both teams played excellent tennis against quality opponents, and this served as a good week of warm-up matches before Patriot League play hits full stride.The men’s team played matches against Stetson University, Florida Atlantic University and Bethune-Cookman College. The Raiders lost their first two matches against Stetson and Florida Atlantic, but finished the week on a positive note with a win against Bethune-Cookman.Stetson was the Raiders’ toughest opponent of the week, beating the Raiders, 6-1, with the only Colgate win coming at first singles, thanks to senior co-captain Reed Hagmann. There were many hard fought matches, but Stetson proved to be too much for the Raiders.The Raiders then squared off against a tough Florida Atlantic team, which beat the Raiders, 5-2. Colgate was able to capture the doubles point and also earned a victory at fifth singles, as senior co-captain Pete Oman emerged victorious. The other Raider players had tough matches, but they could not prevail in the extremely hot conditions.The men finished their spring vacation with a match against Bethune-Cookman, which they won by a score of 5-2. The Raiders captured the doubles point by sweeping all three matches and then won their first, fourth, fifth and sixth singles matches. The win snapped a two-match losing streak and helped give the Raiders some momentum as they enter the bulk of their Patriot League schedule.Hagmann and Oman stepped up for the Raiders this week, as they both went 2-1 in their singles matches. The duo showed great leadership this week and will be very important to the team during Patriot League play. In addition, Oman and first-year Mickey Gallagher went 3-0 in doubles together this week and are becoming a formidable combination at the second doubles spot.”We had a very tough start to the week as we lost our first two matches, but we finished the week strong,” head coach Patrick Fisher said. “I think on a better day we could have taken out Florida Atlantic, but it was good to play such a tough opponent to warm up for Patriot League play. Spring Break also gave us a chance to play outdoors and get used to outdoor conditions as the weather begins to get warmer.”The Raiders seemed to have trouble all week adjusting to the outdoor conditions after playing indoors for so long, but that will not be an excuse in the second half of the season. The women, like the men, went 1-2 last week against Flagler College, the University of Wyoming and Bethune-Cookman. The week started off very strongly for the women, as they beat Flagler, 4-3, in a tight match.After losing the doubles point, the women knew they had to make up ground in singles play. Even though they could not earn a win at the first singles spot, the Raiders won at third, fourth and sixth singles to go up, 3-2. After dropping the fourth singles match, the pressure fell to senior co-captain Jamie Maldow to prevail in second singles.Maldow showed nerves of steel by winning a tight two-set match to give the women the victory. It gave the women their seventh victory of the year and helped boost the team’s morale.The Raiders next played Wyoming, who swept the women at all positions to earn a 7-0 victory. Wyoming was an extremely good team and the ladies could not find any answers to this high-powered school from the West.The women hoped to end their trip on a high note with a win against Bethune-Cookman, but they lost the match by the score of 4-3. The women lost the doubles point and then hoped to make a comeback in singles play. However, they could only win three of six singles matches, leaving them one match short of beating the Wildcats.It was a solid week for the women overall, with many Raiders playing excellent matches. Senior Ali Grabler had the best week out of all the women, recording 2-1 records in both singles and doubles. First-year Alex Seaton also had a solid week for Colgate and will be an important part of this team if the Raiders are to have success in the Patriot League.With Spring Break over, both the men and women now enter the bulk of their Patriot League schedules. The men enter league play with an overall record of 6-14, while the women have a record of 7-6. However, overall records are thrown out, as now the only record that matters is the league mark. Both teams are 1-0 in Patriot League play, with the men facing off against league foe Lehigh tomorrow. The seniors of both the men and women’s teams will need to step up their leadership and help the younger members of their teams handle the intensity of league play.