Men’s Hoops Defeated by One Point 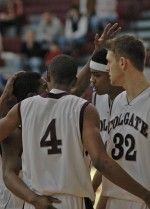 What looked to be a happy final chapter to Colgate’s regular season turned into their most disappointing defeat of the year on Saturday, as the Raiders fell to Bucknell, 60-59, in Lewisburg, PA.Like so many other road games this season – and like its January 11 meeting with these same Bison – Colgate rallied from a big deficit. With five minutes to play on Saturday, the Raiders trailed, 57-47. In their typical resilient fashion, though, Colgate scored 12 unanswered points to take a two-point lead with 54 seconds to play on senior co-captain Andrew Zidar’s jumper from the baseline.After the two teams traded turnovers, junior Alvin Reed rebounded a missed three-pointer by Kevin Bettencourt and was fouled with 15 seconds remaining. Given the chance to ice the game, Reed failed to capitalize, missing the front end of a one-and-one. After a Bucknell timeout, the Bison continued what had worked for them all game. They got the ball to center Chris McNaughton – who had a game-high 16 points – in the low post, but Colgate first-year forward Alex Woodhouse rejected his attempted lay-up. With one last chance to get off a shot, Bucknell’s Charles Lee in-bounded the ball with 1.6 seconds remaining. He found Chris Niesz open on the point; Niesz drained a three that gave Bucknell a thrilling one-point victory and sent the Sojka Pavilion crowd onto the court.Colgate continued its improvement on the glass, out-rebounding the Bison, 31-26. Colgate senior co-captain Keith Williams led both teams with nine rebounds.Although the Raiders shot 45.3 percent from the field – nearly matching Bucknell’s 45.5 percent – first-year Kyle Roemer and sophomore Jon Simon were the only Colgate players in double figures. Colgate’s uncharacteristically poor 4-of-17 performance from beyond the three-point arc played a large part in the low offensive output. Bucknell keyed on Simon for the entire game, holding him without a three-point basket on only two attempts.Three Colgate players were honored at the Patriot League Tournament in Worcester on Thursday night. Zidar and Reed were both selected to the All-Patriot League Second Team. Zidar averaged 12.5 points per game during the regular season, good for second-best on the team, while his 6.6 rebounds per contest led Colgate. Reed led the Raiders in scoring with 13.1 points per game. His 89 assists were best on the team, as were his 52 made three-point field goals and 31 steals.Roemer was also selected to the Patriot League All-Rookie team. He started the first 21 games of the season, compiling an average of 9.7 points per game. A solid rebounder from the guard spot, he grabbed 3.4 boards per game. His three-point percentage of 45.1 percent and his free-throw percentage of 84.4 percent were the best on the team, with his three-point percentage also leading the Patriot League.As disappointing as the outcome of the Bucknell game was, the result had no effect on the Raiders’ postseason placement. Finishing the year tied with Lehigh for fourth place in the Patriot League means that the Mountain Hawks and the Raiders – seeded fourth and fifth, respectively – will face off in a first-round game in Worcester, MA, at 5:30 p.m. today. The victor will face the winner of the Holy Cross-Army game at 1 p.m. on Sunday for the chance to move on to the championship game, to be played at the home of the highest remaining seed.