Raider Softball Gets No Breaks While In Florida 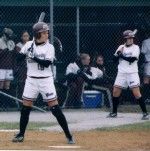 It’s been somewhat of a roller coaster ride for the Raider softball team in the last few weeks. March 5 marked the official start of the season for the Raiders, as the women kicked off the year at the George Washington Colonial Challenge in Washington, D.C. The squad opened on a high note, emerging victorious in its first game of the tournament against the host school, winning 2-1. Manhattan College and Army proved to be more of a challenge for the Raiders over the weekend, as both teams defeated the Raiders, 3-1 and 9-4, respectively. The women proved their resiliency by coming back for game two on Sunday against George Washington and walking away with another win, shutting out the hosts of the tournament, 1-0.There was no lounging on the beach for these women during Spring Break, as the team was hard at work in Kissimmee, FL, competing in the annual Rebel Games at the Osceola Sports Complex. The women were scheduled to play 10 games while in the Sunshine State, but as has often been the case, the weather interfered with the Raiders’ plans. Three of the 10 games were cancelled due to rain. “The weather has played a major factor in holding back our progress,” head coach Vickie Sax said. “We’re about one week behind where we should be.”In past years the Colgate women have resorted to shoveling snow piles off the field before games. Even in Kissimmee, bad weather still managed to plague the squad. When they were able to play, the Raiders again opened a tournament on a strong note, with a nail-biting 9-8 win over Monmouth University in which Colgate scored the final and decisive run in the top of the seventh inning. The Colgate squad kept the momentum going, adding another tally to the win column with their second shutout of the season, a 6-0 victory over Cleveland State University.Unfortunately, it was not all smooth sailing for the squad, despite the impressive performances early. Four consecutive losses, including a 12-1 loss to George Washington, whom the Raiders had dominated the previous week, forced the women to take a step back and perhaps reexamine their strategy. Most importantly, however, it is necessary that the team work out any kinks now, at the start of the season.The Raiders are a young squad this spring, with five first-years on a roster that only lists 12 players. Perhaps inexperience is to blame for the bumpy start, but there is certainly no lack of talent. First-year Whitney Scott, playing first base for the Raiders, has already earned two Patriot League Rookie of the Week awards this season. And with the very small roster, every player will be counted on be contribute to the team.”Our spring training trip allowed us to identify player’s roles,” Sax explained. “Now it’s a matter of letting the lineup gain confidence in their abilities and step up to our expectations.” The team got one more win in the last two games played at the Rebel Games, a 4-2 win over Youngstown State that gave the team a good note on which to fly back to New York.Currently the squad stands with a 6-7 overall and has yet to play a Patriot League opponent. Incredibly, the squad has already played half of the games on their schedule for this spring. But more importantly, the team’s Patriot League schedule begins this weekend, as the team travels to Army for a total of four games tomorrow and Sunday.