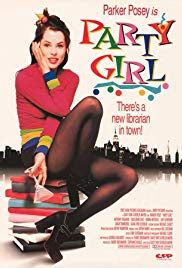 On April 11, the film “Party Girl” (1995) was shown in the Ho Tung Visualization Lab in celebration of National Library Week. The Vis Lab makes for an interesting movie experience. For those who haven’t been inside, it is a digital planetarium similar to those used in museums. The seats recline and are affixed in ascending curved rows facing a domed ceiling composed entirely of a screen capable of displaying things such as the night sky, a roller coaster simulation and films. To make the movie viewable on the curved display, the screen was restricted to showing only a curved rectangle. This had the effect of making the movie seem as if it was shown in 3D, making the overall experience of viewing “Party Girl” highly memorable.

As for the movie itself, “Party Girl” is a 90s flick about a young woman and her struggle to adapt to real life. Mary, the protagonist, begins the movie at the end of her rope. She is 25, broke and her only remaining relative is an older librarian godmother who repeatedly reprimands Mary for being too much like her mother.

Mary is a character with whom some Colgate students may be able to empathize. She loves partying, nice clothes and is very conscious of her social status. She even breaks up with a bouncer because being with him “lowers her worth.” It’s not that Mary doesn’t want to work—she just does not want to do menial work. Being a waitress or working any job where she is told what to do is Mary’s worst nightmare. Running out of options, Mary eventually accepts a job at her godmother’s library.

Working at the library initially starts off poorly for Mary. She seems to think that observing the propriety typically expected in a library is for lesser people. However, anyone who stays in a library long enough will eventually read something interesting, and Mary is no exception. Unexpectedly, the book that first grabs her attention is “The Myth of Sisyphus” by Albert Camus. From this moment forward, Mary is impassioned on her search for knowledge.

Meanwhile, Mary’s social life is as chaotic as ever. While moving into a new apartment, Mary attempts to maintain appearances despite selling her wardrobe. Her friends are vaguely aware that something is different about Mary, but mostly assumes that nothing out of the ordinary has occurred.

Mary’s latest love interest, oddly enough, is a Lebanese falafel vendor, (Omar Townsend), who might very well be an actual falafel vendor, considering his acting career consists solely of this one movie. Their relationship is difficult to believe and Townsend’s poor acting is one of the main reasons for this.

The movie is entertaining and the pop music soundtrack helps the 90-minute film reach its ending painlessly. However, there are too many scenes with little to no importance to the story. The story itself, of a young woman learning how to become a responsible adult, is a good one with plenty of themes about independence and freedom to be explored. I wish the film could have developed Mary’s motives further, and focused less on wild dance parties or the robotic acting from Townsend. Overall, I feel confident in saying that unless you are a librarian, “Party Girl” is completely and utterly average.