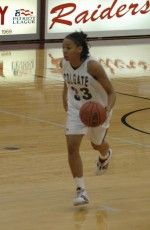 With a disappointing league record of 6-8, the Colgate women’s basketball team enters the Patriot League Tournament as the sixth seed out of eight teams. However, the underdog Raiders enter postseason play with some momentum after a blowout 84-66 victory over Bucknell in their season finale. Colgate, the league’s defending champion, also received a number of individual honors at the close of regular season play, reminding potential playoff opponents of its talented and dangerous roster.Senior co-captain Emily Braseth leads Colgate’s charge, and was named this week to the All-Patriot League First Team for the second consecutive season. Braseth led the league in scoring this year with 17.6 points per game, and ranked second with 7.9 rebounds per contest.Also honored this week was junior point guard Megan Ballard, who was the obvious selection as the Patriot League Defensive Player of the Year. Ballard dominated the league with 3.64 steals per game this season, ranking 17th in the nation. Her resume includes a nine-steal game against Lehigh and seven-steal efforts against both Bucknell and American. She also averaged 8.2 points and 2.9 rebounds per game, while leading Colgate in assists.Braseth and Ballard were key contributors in the Raiders’ big win over Bucknell on Saturday, and will have to repeat those performances to catapult Colgate to postseason success as well. Braseth was particularly dominant, turning in a 26-point, 11-rebound effort in her final home game as a senior.Three other Raiders scored in double figures. Senior guard Allison Lipinski poured home 16 points, while senior co-captain Leandra Fuller and sophomore guard Molly Patterson contributed 10 points apiece. Fuller added nine rebounds and four blocked shots, while Patterson dished out four assists to go with yet another hot shooting day off the bench. Ballard turned in her typical all-around solid effort, with seven points, four assists and four steals.The Raiders dominated the Bison across the board, shooting 47.9 percent from the floor, winning the rebounding battle 43-35 and dishing out 22 assists against just 13 turnovers. Head coach Kristin Hughes, after seeing her team snap its four-game losing streak by finally playing up to its potential, was impressed. “As a team, those were two of the best halves of basketball we’ve played all year,” she remarked.With the taste of victory still fresh, the Raiders now enter the postseason as a motivated and dangerous sixth seed. In the first round, Colgate takes on third-ranked Army on the campus of Lehigh. Should they win, the Raiders would stay in Bethlehem to take on the winner of the first-round battle between seventh-seeded Bucknell and the hometown favorites, second-seeded Lehigh. The championship game is scheduled for Wednesday on the home court of the highest remaining seed. The favorite on the other side of the bracket is top-seeded Holy Cross, a team that finished the Patriot League regular season with a 12-2 record.”We intend on winning on Thursday and Saturday,” Hughes enthusiastically told a crowd of players and family members after Sunday’s victory over Bucknell, “and we are praying to see Holy Cross in the championship game.”To get that far, Colgate will first have to find a way to buck the trend against Army. The two teams squared off twice this season, with the Black Knights winning both meetings. Their first encounter came on the opening day of Patriot League play, back on January 8 on Army’s home floor. Both teams came out flat in the opening minutes, but Army used a strong second half to come away with a 68-53 win. Army won largely because of its ability to keep Braseth out of the game. Colgate’s star forward played just 18 minutes due to foul trouble, and scored a season-low two points on just 1-of-3 shooting. It was the only league game all year in which Braseth failed to reach double figures in scoring; not coincidentally, the 15-point loss was Colgate’s worst defeat of the league season.The Raiders’ chance for revenge did not come until the second-to-last game of the season, when Colgate hosted Army in the teams’ second and final regular season match-up. Braseth and Colgate again started slowly and found themselves down by 16 points at halftime, but used a strong second half to come back and make it a ballgame. Colgate’s full-court press caused Army fits and forced the Black Knights into committing 22 turnovers, but in the end, the Raiders’ comeback ran out of time. Army won, 71-69, on a game-winning lay-up that came with just seven seconds remaining.Colgate hopes that the third time the teams meet – this time on a neutral court -will prove to be the charm. The streaky Raiders will look to ride their wave of momentum right into next week’s championship game and earn a return trip to the NCAA Tournament.