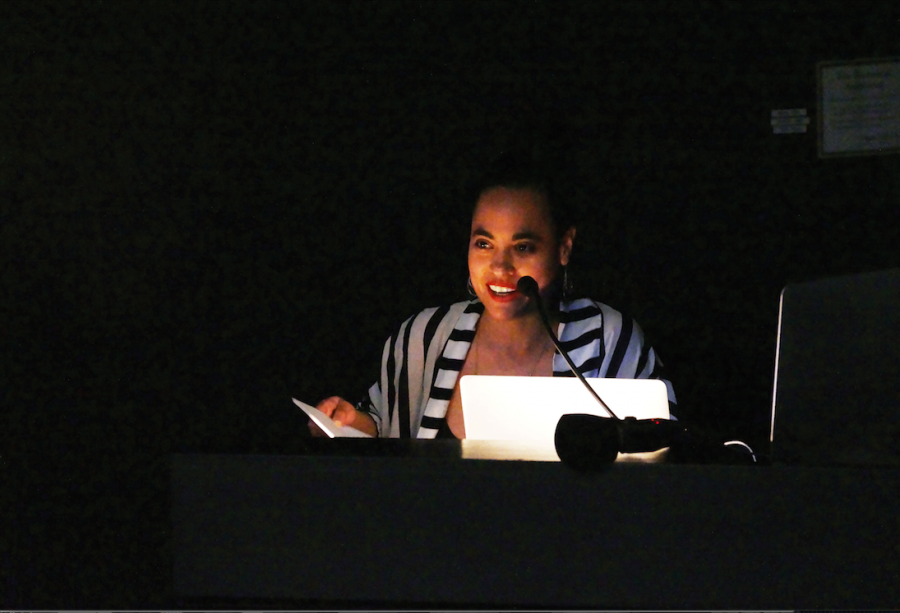 Chloë Bass, a multiform conceptual artist and self-proclaimed public practitioner whose work has been displayed both nationally and internationally, performed a descriptive piece titled “This is a Film” on March 28.

“This is a Film” is a component of Bass’ current project “Obligation to Others Holds Me in My Place.” This performance was meant to engage the senses and imaginations of audience members through the use of clips from family home movies found in online archives. Bass’ ultimate goal is to study intimacy at the individual level, progressing to pairs and groups and working her way up to study- ing intimacy at the level of the metropolis, a feat that she admits may span longer than her lifetime will allow.

“I feel that generally this project might take me the rest of my life. If I die before getting to the scale of the metropolis that is okay. There are some ways that my practice has a resemblance to architecture in that the projects that are unbuilt have as much resonance sometimes as the ones that are built and that live among us,” Bass said.

Despite this being a performance on footage, the screen was initially blank. The audience was perplexed by the seemingly simple set-up for an art performance, creating an atmosphere of mystery and anticipation in the room. When Bass began speaking, her voice was calm and soothing, acting as the backdrop for the listeners’ imaginations as she described the video of a family gathering that she had chosen as her subject.

Her performance was divided into four sections, each representing 64 seconds of the footage she was describing. She used her words to construct images of how each person connected with each other at various levels of intimacy, through actions such as dancing together, smoking a cigarette or putting each other’s coats on. Bass detailed the appearances and actions of each of her “characters” in a way similar to the telling of a short story. At the end of each section, she would display a brief clip of home movie footage, which was noticeably different than the scene she had described, and remained silent during these interludes. In the clips, the people would be drinking instead of dancing, wearing different clothes, or have a different number of people than the scene she had described. The audience was perplexed, having expected each clip to display the footage that had inspired her lecture, and these moments heightened the suspenseful atmosphere in the room as everyone waited for an explanation.

After concluding her final section, Bass provided the clarity the audience had been waiting for. She wordlessly played the four- and-a-half minutes of silent footage that her 40-minute descriptive performance was based on. The clips she had shown during the performance, she explained, were a way to throw us off and test our senses and imaginative abilities. Viewers were finally able to connect Bass’ description to what they were seeing, noticing features that she included as well as features that she did not. The most notable exclusion was a description of emotion, which Bass explained during the brief question and answer period that followed her performance.

“I don’t describe [the emotions] because I actually have a lot of suspicion around ideas of empathy, and I think it’s better for you to see it for the first time yourself. I spent a lot of time cutting emotion out of my description,” Bass said.

In response to audience questions, Bass also mentioned two main components of her work: her keen attention to atmosphere and her definition of intimacy. In reference to atmosphere, Bass takes into account the context of a dynamic room and social practice. Concerning intimacy, the defining word of her life’s work, Bass has no formulaic way of explaining her descriptions of intimacy. She thinks of intimacy in the traditional sense of romantic expressions of love, but also within its negative displays as seen in war and slavery. Bass sees something as simple as sitting next to someone on the subway as an instance of intimacy.

Bass successfully wielded her lecture as a weapon against society’s narrow definitions of intimacy, leaving the audience in a state of reflection about the intimacy in their own lives and, by Bass’ broader definition, with the people sitting around them at that very moment.

Bass was brought to campus by the Art and Art History department.