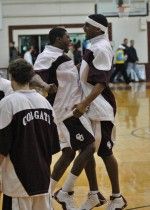 The Colgate men’s basketball team returned to its winning ways on Wednesday night with a 66-59 over Army at West Point. The win, the Raiders’ fourth in the last five games, represented a sweep of the season series with the Black Knights and moved Colgate into a three-way tie for third place in the Patriot League.The Raiders never trailed in the contest, extending their lead to a game-high 18 points with just over six minutes to play in the first half. As has been the case in recent victories, Colgate dominated the glass, holding Army to 18 rebounds. Careful ballhandling by Colgate’s starting backcourt, junior Alvin Reed and sophomore Jon Simon – who combined to turn the ball over only three times – proved key in negating the hot shooting of the Black Knights, who connected on 49 percent of their field goal attempts.Army’s propensity for finding easy buckets in the paint almost helped them climb out of that 18-point deficit. Like the two contests last year in which a mediocre Army club shot lights out and upset the Raiders, containing Army’s dribble penetration again proved to be a difficult task for Colgate. Behind Jarell Brown’s 18 points, Army stormed back in the second half, cutting the Raider lead to a single basket – 62-59 – with 17 seconds to play. In the end, Colgate’s rebounding advantage and steady guard play won out; four Colgate free throws down the stretch iced the game.Reed scored 15 to lead all Colgate scorers, while senior Andrew Zidar scored 14. Junior Jon Foss continued his recent tough interior play for the Raiders, grabbing a game-high eight rebounds and blocking two shots. In Colgate’s only game last weekend, the Raiders lost to Holy Cross, 59-46, in a Senior Day game that was much closer than the final score indicates. Before the largest crowd of the season at Cotterell Court, the first-place Crusaders and Colgate played 33 minutes of tough, defensive-minded basketball before the Raiders’ offensive wheels fell off.The most important improvement Colgate has made in its recent 4-1 streak has been on the glass; against a larger, more athletic Holy Cross team, Colgate held its own, getting out-rebounded by the slim margin of 44-43. The story of the game, though, was the Raiders’ inability to convert easy baskets when the game was well within reach.”They doubled us in the post and got us playing at a pace we didn’t want to play,” said Zidar of the Crusaders’ defense in the second half, which held Colgate to 19.2 percent shooting from the field.Still, with 9:07 to play, a pair of free throws by Zidar cut the Holy Cross advantage to 43-40. Despite three consecutive defensive stops by the Raiders, Colgate was unable to take control of the game. Some poor ball movement made easy baskets hard to come by.”It was a physical game; the refs let the game go,” head coach Emmett Davis said. “There weren’t a lot of shot opportunities, and we missed a lot of shots that would have given us momentum.”The momentum was Colgate’s for the taking when the deficit sat at only three for over two minutes in the second half. With the Raiders failing to convert on the offensive end, though, Holy Cross seized control of the game. Over the final 6:51, the Crusaders, led by the inspired play of Kevin Hamilton, went on a 16-6 run. Colgate was held to two made field goals during this decisive run; after playing some of their best basketball of the year in rallying from an early 21-9 deficit, the Raiders simply seemed worn out.In his final appearance at Cotterell Court, Zidar was Colgate’s second-leading scorer with 15. Reed led all scorers with 16; Hamilton and Greg Kinsey each had 14 for the Crusaders, who improved to 11-1 in the Patriot League and 20-5 overall. Colgate plays its final regular season game against second-place Bucknell on Saturday evening in Lewisburg, PA. Tip time is set for 7 p.m.