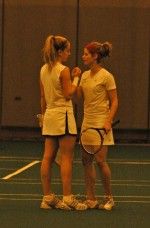 The Colgate men’s and women’s tennis teams put new meaning to the phrase “Home Sweet Home” this weekend, as the two squads finished with a combined 4-0 record at Sanford Fieldhouse.The men were glad to be home after playing the first four weeks of the spring season on the road. The Raiders came home with a nine-match losing streak, which they effectively ended with a win against Bloomsburg last Friday night.With dozens of fans watching the Raiders take on the Huskies, the team delivered a 4-3 win that gave the team its second win of the season. On the back of impressive singles and doubles play by senior co-captains Pete Oman and Reed Hagmann, the Raiders won the match. The score may have seemed close, but the Raiders easily earned four points and played exceptional doubles tennis.The team’s confidence now ran high, and on Sunday morning the Raiders engineered their first winning streak of the season with an impressive 6-1 victory against Niagara. The Raiders swept all three doubles contests, while winning five of the six singles matches.Hagmann and Oman again led the way, but first-years Mickey Gallagher and Michael Shea also played exceptionally well. Shea earned both his first career doubles and singles wins, which was very pleasing to the young player: “I’ve still got a lot to learn, but it’s great to get a win for my team and I will always remember this match from an individual perspective.”Shea was given an opportunity to play after classmate Tyler Deck was unable to compete because of an ankle sprain. Shea took full advantage of his playing time and gained valuable experience this weekend.Although the Raiders swept their matches at home on Sunday, the team traveled to Binghamton to face a much improved Bearcats squad. The Raiders fell, 5-2, but the team played great matches across the board.The men were close to getting the doubles point, but Binghamton prevailed. In singles, Oman and Gallagher won the lone two matches for the team – both players won all three of their individual singles matches over the weekend.Head coach Patrick Fisher was pleased with the team this weekend. “It was great to get two wins, but we still need to find more ways to improve,” Fisher said. “Our doubles looked much better this weekend and I hope they will continue to improve. I was very pleased with Mickey and Oman, who played very well in singles and as doubles partners. Our new first doubles team of [sophomore] Chris Innes and Reed Hagmann played great doubles together and also had solid weekends at singles. Our team has really stepped up these past three weeks, especially with three of our top six players on the injured list. I just hope we can get healthy and make a run in the Patriot League.”The men’s record increased to 3-10 with the win and the Raiders next travel to Dartmouth tomorrow for a match against a tough Big Green team. Then, the team plays its first Patriot League match on Sunday at home against Lafayette. Fisher hopes that the team will be mentally prepared for that match, in order to get off to a good start in the Patriot League.The women’s team matched the men at home this weekend by also beating Bloomsburg and Niagara. The Raiders started the weekend with an impressive 7-0 victory against Bloomsburg, which is ranked in the top 20 in Division II.Fisher, for one, was very happy with the win. “We won all three doubles and got great singles play out of everyone,” Fisher said. “The women are finding a way to win and I am very happy about that.”On Saturday, the women beat Niagara, 6-1, as first-year Jessica Wells earned her first collegiate victory. After losing last year to Niagara, 4-3, the women played very well and reversed the result from last year.Fisher called the weekend a complete team effort for the women, as he was happy to increase the team’s record to 4-2. The women, like the men, will also face Dartmouth and Lafayette this weekend.The Dartmouth match has bigger implications for some Raider upperclassmen, since the head coach of the Big Green women is former Colgate men’s and women’s coach Bob Dallas. Fisher realizes it will be tough for some of the women to face their former coach, but he feels the team will be able to overcome that and play great tennis.It was a great weekend for both the men’s and women’s tennis programs, and now they will look to use this momentum as they start their Patriot League schedules. The bulk of both team’s schedules will be at home on the comfortable “Big Green” of Sanford Fieldhouse. Being at home will be a huge advantage for both squads, as the teams look to climb the ladder in the Patriot League.