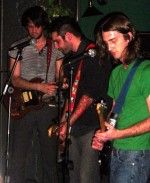 Over 200 Colgate students gathered in Donovan’s Pub last Saturday for a night of music presented by Colgate’s Student Committee on Providing Entertainment (SCOPE). SCOPE brings independent bands to campus for free concerts open to all Colgate students. Last weekend’s event consisted of three bands, including Cities, The Detachment Kit and The Walkmen. Cities, which comprises Colgate seniors Casey McCormack and Jared McCarthy, served as the night’s concert opener. Following their performance, the audience got a taste of the independent band The Detachment Kit. Described by SCOPE member sophomore Bill Gabler as “a pretty intense show,” The Detachment Kit’s performance included several personal serenades by lead singer and guitarist Ian Menard, as well as many “trips through the crowd.” The Detachment Kit primarily played their older songs, such as “Yourself: A Majesty of Infinite Space,” from their 2002 album entitled They Raging, Quiet Army. The album was a hit, especially among college students, assuring the Chicago-based band a spot in the college radio top 40. The Detachment Kit’s new album, Of This Blood, was released this year. It has proved a success among not only pop-loving college students, but also among fans of many genres of music, including emo, rock and punk. Following Cities and The Detachment Kit were The Walkmen, the concert’s featured band. The Walkmen formed in 2000 after members Walter Martin, Paul Maroon, Matt Barrick, Hamilton Leithauser and Peter Bauer left their former bands, Jonathan Fire Eater and The Recoys. The Walkmen’s 2002 debut album, Everyone Who Pretended To Like Me Is Gone, was described by www.mtv.com as “having the sound of two different bands: one with a chaotic, soaring, and unique live rock sound; and the other with a spacious, wide-open recorded sound.” Since their debut, the Walkmen have gained popularity and recently toured in the United States, Greece and Scotland. In addition, they were featured on a November 2004 episode of Fox’s hit television drama The O.C. At the SCOPE concert, the Walkmen performed songs from Everyone Who Pretended To Like Me Is Gone, as well as their new single “Little House of Savages” from their recently released album Black and White. The highlight of the show, according to Gabler, was “when the Walkmen closed their set with their quasi-hit single ‘The Rat.'” If you missed out on this concert, SCOPE has plenty of events in store for the remainder of this semester. Next Tuesday, Mirah, The Lovers and The Weeds, three female folk-rock/pop groups, will be performing at Donovan’s Pub. Also at the Pub this month will be Thick as Theives, made up of Colgate alumni, Dufus, a folk-rock/performance art group, and Bling Kong, a New York City dance-punk show featuring four cheerleaders and three drummers. Later this spring, SCOPE will bring to the Palace Theater the Heiruspecs, described by Gabler as “hip hop from live musicians,” and RJD2, a DJ known for his turntable skills. The time and venue of those events will be announced at a later date, and anyone interested can contact SCOPE for more information.