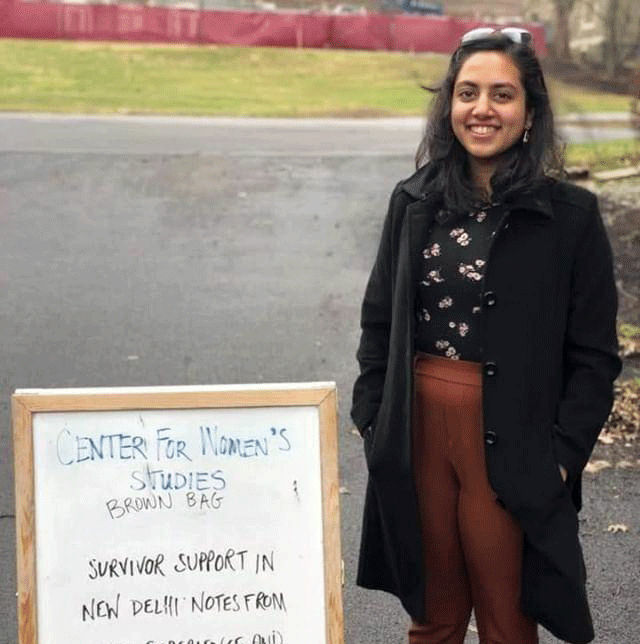 “Meraki” is a Greek term that sophomore Jailekha Zutshi discovered and later used to name a reflective movement workshop she runs through Haven, Colgate’s center for survivors of sexual violence.

“‘Meraki’ translates to something to do with the soul,” Zutshi said. “It literally means ‘leaving a piece of yourself in your work.’ The idea is that if it’s just you reacting [to music], it’s entirely your authentic expression and reflection.”

Dance is incredibly important to Zutshi, so when she was asked to create a project for Haven, it was the first thing she turned to for an idea. Last year, she came up with the idea for Meraki, labeled as a “dance workshop.”

“I reworked it completely last semester,” she said. “It’s now a ‘movement workshop.’ I switched to ‘movement’ from ‘dance’ is because it’s accessible and the term ‘dance’ is intimidating to people.”

Zutshi now begins every workshop by asking people the first thing that comes to mind when they think of the words “dance” and “movement.” Her goal is to stress that dance is just movement in ways that have been deemed socially acceptable. Without the limitations of the term “dancing,” participants are free to move around and react to the music in whatever way they desire, including listening. While this has always been the case, reframing the name to be a movement workshop has been helpful with managing expectations.

The workshop itself consists of three different parts: a warm-up, the “movement” part and a breakdown session. During the warm-up, participants are allowed to warm up in whatever way they would like; Zutshi guides them through some basic exercises if needed and makes sure everyone knows how to move in a safe manner. While the music plays, participants aren’t required to be physically moving. They can simply sit in the space and react. It is not a dance class—the lights are dimmed, a curtain covers the mirror and the studio is intimate. The songs Zutshi plays all have one thing in common:

“Everything is instrumental. There’s no lyrics. It’s all slightly weird music in that you won’t hear it on the radio,” Zutshi said. “But I do that for two reasons: I think lyrics often happen to be very heteronormative and I don’t want to impose that on people, but also I think if there are lyrics, people think in terms of words, not emotions. Having words of any sort is going to influence you in some way, and I don’t want that to happen.”

The music is supposed to help participants understand their emotions through their own movement. Everything about the experience is based on the participant; Zutshi is merely a guide.

The workshop ends with a brief period during which everyone is allowed to talk about what they felt and how the music made them react. Participants are allowed to share their emotions openly; everything that occurs at the workshop remains confidential. The debrief at the end has helped Zutshi see how much the reflective workshop has influenced those who participate in ways that she couldn’t even imagine herself.

“People have told me they’ve felt empowered or centered and I was like, ‘This is great. I don’t know how this happened for you, but I’m so glad this has happened for you,’” she said. “I think it’s basically a way for people to slow down and think through their emotions in a way they don’t normally.”

Although the program is run by Haven, it is not strictly closed to survivors of sexual violence and is open to all participants. The turnouts may not be the biggest, but Zutshi says that those who participate are rewarded. She conducts the workshop whenever she has the time on select days during the semester, and you can find them listed on Colgate’s events calendar.