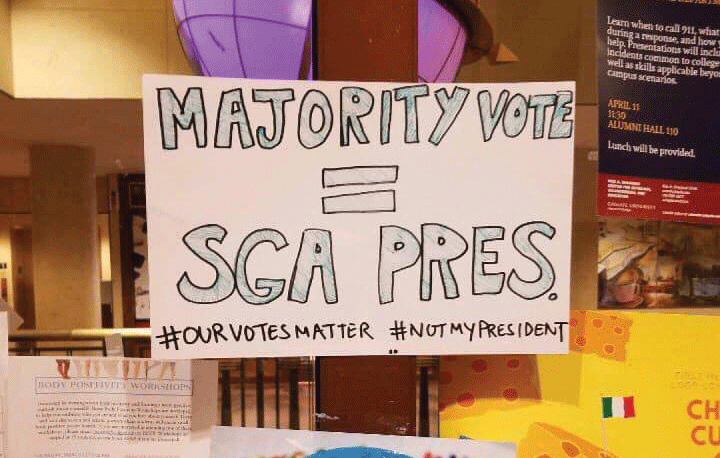 Mara Stein, Editor-in-Chief
Editor’s Note: After this article went to print, the SGA announced on Wednesday, April 17 that it passed a resolution supporting a unified governing body including both tickets of the 2019 SGA Presidential/Vice Presidential Election. The resolution can be vetoed within a week. If uncontested, Kate Bundy and Christian Johns will serve as co-Presidents, and Ayah Elarabi and JJ Citron will serve as co-Vice Presidents during the 2019-2020 academic year.
Print versions of The Maroon-News will be distributed Thursday, April 18 with the following article.

The SGA Presidential and Vice Presidential Election ended in controversy when campaign violations resulted in the removal of one ticket and subsequent win of the ticket that received fewer popular votes from the student body.

Though juniors Christopher Johns and JJ Citron received 106 more votes than juniors Kate Bundy and Ayah Elarabi, the Johns/Citron ticket lost the election after SGA leadership and SGA election commissioners issued two violations against them. The second of the two violations, the unauthorized publication of election margins, resulted in the ultimate removal of the ticket.

According to election commissioners, sophomore Nik Rajavasireddy and junior Kate Lofgren, the first violation had to do with the failure of the Johns/Citron team to remove campaign posters within a required time frame. The SGA Elections Handbook says that all printed materials “must be removed from campus locations within three days of the close of election voting,” but the Senate Parliamentarian miscommunicated the meaning of this clause to the candidates. The result was that the Johns/Citron ticket kept their posters up about 24 hours longer than the Bundy/ Elarabi ticket did. Though the misunderstanding about the proper time frame was not the fault of the candidates, SGA leadership ruled that regardless of candidates’ intentions and understandings, the Johns/Citron ticket’s longer poster exposure time could have impacted the results of the election.

The leadership based this conclusion off the Elections Handbook, which states that “any violations of [election] rules, the Student Government Constitution and associated Bylaws or University regulations and policies, whether intentional or unintentional, may be subject to penalty.”

According to the Elections Handbook, penalties may take the form of cuts to campaign funding, cuts to a ticket’s total number of votes or the removal of a ticket entirely. Because each ticket had already used up its campaign funding, the Senate planned to debate whether or not votes should be deducted for the poster violation. If they decided to deduct votes, 122 votes would have been removed from the Johns/Citron ticket. Per handbook rules, Rajavasireddy and Lofgren arrived at this figure by calculating 20 percent of the number of votes the Johns/ Citron ticket received during the additional time their posters remained up across campus.

Before the Senate met to discuss the violation penalty, though, a member of the Johns/Citron campaign team prematurely tweeted information about the election results on Sunday, April 7, two days after the close of the voting period, announcing a 106-vote difference between the two tickets.

The election commissioners then issued a second violation against the Johns/Citron ticket concerning the unauthorized release of election results.

Lofgren said it is unclear how the campaign team was able to access the margin of votes.

The publication of the 106-vote margin meant that senators deciding on whether or not to issue a 122-vote penalty for the initial poster violation knew in advance of their vote that their decision would determine the results of the election. SGA leadership concluded that it was impossible for the vote to be unbiased.

At the end of a four-hour, closed meeting to discuss the second violation on Tuesday, April 9, the Johns/Citron ticket was removed as a penalty.

“Due to the fact that the campaign period had ended, and the release of the margin of the election compromised the Senate’s ability to reach an objective decision on vote deduction, removal of the ticket was the only remaining specified action in the SGA Elections Handbook that the Election Commissioners could propose,” the SGA said in an email to the student body.

With the removal of the Johns/Citron ticket, Bundy and Elarabi won the election as if they had run uncontested. The election commissioners announced the win via email on Wednesday, April 10 at 12:24 a.m.

Three hours later, junior Selena Vanapruks created a petition call- ing for a campus-wide re-vote. It had 495 signatures at the time of this writing.

“I recognize that the SGA had good intentions, but their decision to have a closed meeting—and to keep it confidential—I think really hurt people, myself included,” Vanapruks said. “A lot of us felt like we were being left in the dark, and that our opinions were not being considered at all.”

The SGA said the meeting was confidential to ensure an expedient conversation that concentrated on relevant bylaws and allowed Senators to ask questions without fear of judgment. Because Senators did not unanimously agree that the meeting be recorded, SGA leadership could not ethically film or distribute notes on the conversations that took place.

Bundy and Elarabi said that they agreed with the petition’s call for a re-vote and considered not accepting their win, but that a re-election was not feasible. Because the SGA issued the second violation instead of voting against it, there was no opportunity to discuss an alternative solution.

“Our ideal situation was a re-vote or re-election,” Elarabi said. “There’s a lot of talk about the integrity of taking something you didn’t win, but there was not another option for us.”

This election was hardly the first time the application of SGA bylaws made for highly contested races. In 2017, 2010 and 2008, issues of candidate resignations, campaign violations and abuses of power resulted in campus-wide controversies.

Rajavasireddy said that although the rules can be challenging to follow, enforcing them is crucial to the assurance of fair elections.

“I understand from an outsider’s perspective why you’d think some of the the rules are arcane and that whoever wins the popular vote should be SGA president,” he said. “However, if we don’t back up every decision we make with SGA bylaws, that opens up a lot of bias.”

The SGA said it plans to amend the Elections Handbook to address vague clauses, clarify punishable offenses and add more penalty options. SGA also plans to communicate directly with Johns and Citron about how they can play a role in future policymaking and election revisions.

“I’m very hopeful that we can unite the community through a potential solution. I’m not sure what that looks like right now, but the campus needs something,” Johns said. “Despite the election, we are here to make students lives better and do what’s best for the campus. It’s the bedrock of public service, and why I have dedicated most of my time at Colgate to it.”

Bunday and Elarabi echoed this sentiment.

“We have been talking to [Johns and Citron] in open dialogue and are excited to build unity going into next year,” they said.