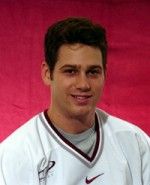 Last season the Colgate men’s hockey team entered winter break with a record of 7-6-2, with only three wins in six conference games. With a pair of games remaining on the docket before this year’s holiday hiatus, the Raiders have posted an impressive 10 wins in 14 games, and face two chances to add to their three league victories. Two weeks ago Colgate encountered its first pair of road league games against Dartmouth and Vermont. The Raiders and Big Green met up for the 13th time in four years on November 19, with the match-up standing at a nearly even 5-6-1 in favor of Dartmouth. The following night they bussed north to Burlington, VT to meet a red-hot Vermont team in the midst of a seven-game unbeaten streak.In what has become Colgate’s second biggest rivalry match over the last four years, the Raiders jumped on top of Dartmouth early in a bid to even their four-year series record. Senior tri-captain Darryl McKinnon potted the opening tally just five minutes into the game, setting the tone. The Raiders grinded through the rest of the contest, playing a tight style that surrendered few chances on senior goaltender Steve Silverthorn. Even after allowing a tying goal early in the third period, Colgate bounced back. First-year Tyler Burton’s patient wraparound goal ensured his team at least a weekend split, as the Raiders won 2-1.Unfortunately, the momentum from Burton’s goal failed to carry over into the following evening. The Raiders ran into a freight train of momentum in Vermont, which has still yet to be stopped. The Catamounts beat Colgate, 3-1, and have since posted an additional two victories to bring their record in their last 10 games to 7-0-3. The Raiders could not score on any of their nine power play chances, a problem which they have struggled with throughout the year.”Our power play is a little tight,” Colgate head coach Don Vaughan said. “When goals don’t go in on the power play, guys have a tendency to tighten up a little bit and force plays. We’ve got to get them back to thinking that they should just throw the puck at the net and they’ll get a rebound.”Colgate has seemingly had difficulty scoring throughout this campaign. However, through 14 games last year, a season in which the team was considered to have finally broken out offensively, the Raiders tallied only one more goal than they has amassed so far in 2004.”Last year this team won a lot of 2-1 and 3-2 games,” Vaughan said. “It’s tough to score. I would be more concerned if we weren’t getting the chances. But we’re getting some grade-A chances. I’m not overly concerned.”The Raiders hosted Mercyhurst for a pair of non-conference battles last weekend in front of a sparse, Thanksgiving-break Starr Rink crowd. Colgate edged out a pair of victories, scoring three times on each night and allowing only one and two goals, respectively. The men in maroon extended their perfect streak of winning when allowing two or less goals to nine games. Even first-year netminder Mark Dekanich contributed to shutting down opponents last weekend, picking up his first career victory on Saturday night.”We’ve gotten great goaltending on most nights,” Vaughan said. “That gives the rest of the team a lot of confidence. When we’ve had some pretty major breakdowns, our goalies have been there to bail us out.”While Dekanich was busy picking up his first collegiate victory, sophomore Liam Huculak notched the first goal of his career. While appearing on the scorecard infrequently, Huculak makes his presence felt in other ways for the Raiders.”He’s a great skater for a big man,” Vaughan lauded. “Liam brings presence, size and aggressive play to our team. When he’s winning his battles along the wall and then can take the puck to the net, he’s extremely effective. The other night he scored, which was kind of a bonus for him. He’s got more offensive instinct than even he gives himself credit for. The more confident he gets with the puck, the more we’ll see that.”Burton collected his second game-winning goal in two weeks on Friday night. The Langley, B.C. native has made an immediate impact, registering nine points in only 12 games.”He’s playing great,” Vaughan said. “He’s around the puck all the time, he’s very quick and he’s smart. Because he never really stops moving, he’s tough to contain, and as a result he’s been able to generate some offense. We’ve got to be careful that we don’t beat him up too much, though; for a lot of those first years it’s tough to go back-to-back.”Riding a two-game winning streak into this weekend, Colgate hopes to knock off visiting Princeton and Yale tonight and tomorrow night at Starr Rink at 7 p.m.