What Did Brown Do For Colgate? A Lot. 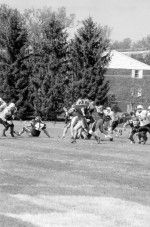 On November 2, 2002, then-sophomore Chris Brown entered the Raider football game against Lafayette after first-string quarterback Tom McCune ’03 left with a ruptured spleen. At that point in his Colgate career, Brown was about as well known around campus as that other Chris Brown profiled last week – he spent his time returning kickoffs. But over the next two-plus seasons, the senior turned his temporary anonymity into one of the most easily recognizable faces in Hamilton and beyond.After McCune’s injury, Brown immediately stepped in and made an impact. Starting his first collegiate game, Brown led the Raiders into Bethlehem, PA and came away with a 28-14 win over the Mountain Hawks – breaking Lehigh’s 27-game home winning streak. From that moment on, Brown had the spotlight directed solely at him.That first win, however, was just the beginning for Brown. He followed that win with two more to end the 2002 season, giving Colgate a share of the Patriot League title with Fordham. The Rockledge, FL native returned next season with the starting job in tow and forever etched his name in the Raider record books by winning the season’s first 15 games before falling in the NCAA national championship game to Delaware.In his career, Brown threw for 5,289 yards, which ranks him fourth all-time in the Raider record books, and ran for 725 yards. He threw 35 touchdowns in his 29 games and ran for 14 as well, proving himself to be one of the best double-threats in the annals of Colgate football. More importantly that statistics, though, Brown brought a new enthusiasm to Colgate football. With Brown at the helm, the team’s epic 2003 season brought national attention to Colgate and was only the second time since the inception of the Patriot/Colonial League in 1986 that Colgate finished in first place all by itself. As the win total increased, so did the excitement and attendance of Raider fans at home games. For the first time in years, people were actually braving the elements and showing up at Andy Kerr Stadium in November and December. Suddenly, Colgate football was important once again on campus – and the man behind center with the quick feet and the strong arm was the man behind it all.The 2004 season has not been as successful as a season ago – a near-impossible task – but Brown nonetheless continued to play hard. It is very appropriate that in Brown’s last two full games, he set back-to-back career highs in passing yards (276 and 318 yards) – against the first and second place teams in the league, no less. No matter what the situation, the senior quarterback always fought for his team, and everyone at Colgate recognized that fact.Although his season and career has ended a game short, thanks to a leg stress fracture suffered last week in the team’s loss to Bucknell, nothing can diminish the many things Brown brought to the Raider football program. His play on the field, along with his positive attitude and strong leadership, cannot be replaced easily.