Students Participate in Annual Take Back the Night March 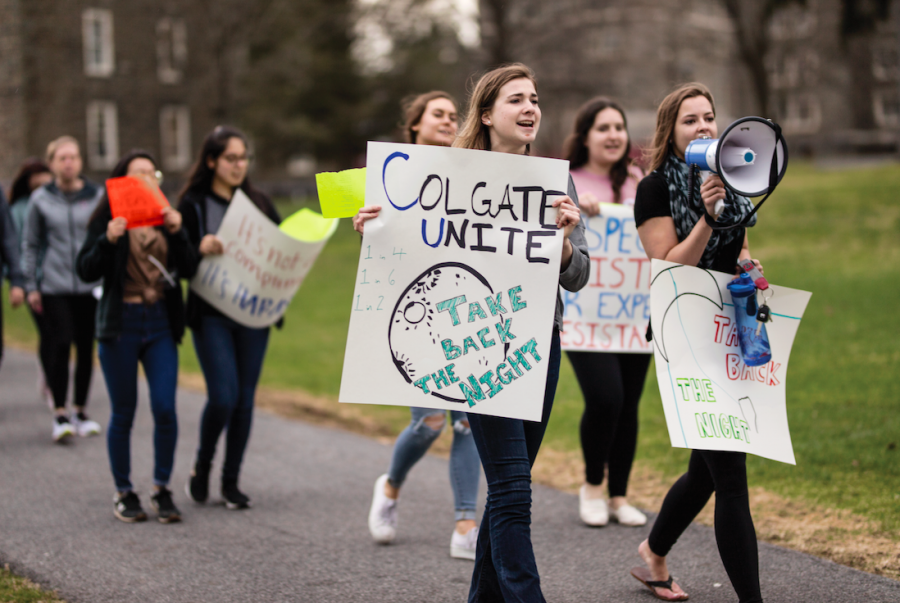 Students march around campus and town to recognize Sexual Violence Awareness Month. Take Back the Night is organized annually by The Network.

“We have the power, we have the right. The streets are ours, take back the night!”

Chants like this rang throughout campus as more than 80 activists joined together on Thursday, April 18 for the annual Take Back the Night March.

The Network—an organization on campus dedicated to improving awareness on issues of sexual assault—has been busy hosting events throughout April in honor of Sexual Violence Awareness month, and on Thursday, members of The Network, students, faculty and staff gathered to march for and with survivors of sexual violence on Colgate’s campus.

Sponsored by The Network, Women’s Studies, Haven and The President’s Club, the march began after students gathered in the Coop conference room. There, marchers made bright posters and buttons calling for action and recognition for survivors on campus. The posters included phrases such as “Don’t be silent, stop the violence” and “We rise by lifting each other up.”

Members of The Network first-year Amelia Showers, sophomore Fiona Grove and senior Kate Bussey, along with their faculty advisors Tracia Banuelos and Sarah Sparber, then gathered the group on the Coop terrace. Director of Counseling and Psychological Services Dawn LaFrance and Assistant Director of Survivor Support Services Denise M. Contreras were also in attendance.

“Preparing for [Take Back the Night], I was a little nervous that the turnout would be low just because there hasn’t been much national news attention to the issue recently,” Showers said. “I was really surprised and happy that we had around 80 people come. It was a really strong community of supportive and driven activists.”

Bussey greeted the crowd and said that whether they were there as survivors, friends, activists or students who got swept up in the crowd, they were loved and welcome. She also said that at this busy time of year, members of The Network are appreciative of the support.

She also told the crowd that Colgate’s campus land was once owned by the Oneida Tribe, and asked that marchers remember who exactly they were taking the land back from. To close she read a poem by Joy Harjo called “Remember,” as the crowd listened in solidarity.

Sophomore Fiona Grove led the march past the Colgate Memorial Chapel and down to Broad Street, all the while leading the crowd in chants, shouting “two, four, six, eight! No more violence, no more hate!” More members of the crowd joined in the chant as the march turned down Willow Path and made its way toward Case-Geyer library.

When the group arrived at the library, Grove asked participants to chant their loudest as they marched through the library and up the stairs to Hieber Cafe, making sure all those who could not step away from their studies could be a part of that moment.

The march reached its final destination at the steps of the Chapel and the organizers stepped up to say a few words. Banuelos said she was proud to see so many students take part in the demonstration. She said daily life can be difficult when your perpetrator is on campus, and announced that Haven would be having its first survivor graduation ceremony at the Haven Counseling center this spring.

“I was so impressed by The Network leadership,” sophomore Abi Goffinet said. “You could see just how passionate they were, and it made everyone else on the march even more enthusiastic.”

Haven and The Network will continue to host events through the month of April, including a Survivor’s Mural, composed of tiles anyone can paint, in solidarity of survivors on campus and in honor of the student activists that started the Haven Counseling center.