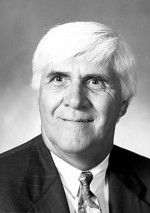 Assistant Athletic Director John J. Dimao was killed Friday morning on his way to work in a one-car accident in Smithfield, about 10 miles north of Hamilton.Dimao, 69, lived at 416 South Peterboro Street in Canastota. Madison County Sheriff Ronald I. Cary said Dimao was driving south on Oxbow Road, which was wet at the time. Dimao hit a tree stump, went off the road, hit several small trees and flipped his 2001 Chrysler convertible. Dimao sustained head and neck injuries as well as skull fractures and was reported dead at the scene. He was wearing his seatbelt, and there was no indication that alcohol or swerving to avoid a deer was a factor.Dimao was a veteran of the United States Air Force National Guard. He graduated from Canastota High School in 1952 and Cortland State Teachers College in 1956. He later received his Masters Degree in Guidance and Education from SUNY Oneonta. He married Sylvia Marmas on June 28, 1958 in Binghamton. Dimao worked for 26 years in the Canastota school system as a guidance counselor, varsity basketball coach, athletic director and assistant principal. He retired in 1992 and joined the Colgate staff in 1993. In his time here, Dimao served as the administrator for the cross country and track program, an assistant basketball coach and, most recently, an assistant to Athletic Director Dave Roach.”John was loved by all and touched many people throughout his entire career as a high school and college administrator,” Roach said. “He was someone who very much enjoyed being here and working with our student athletes and coaches. Colgate athletics will miss John tremendously, but his legacy will continue. [Our community is] a better place because of him.”Dimao leaves his wife; Sylvia, two daughters; Joanne and Jacalyn, two sons, John Jr. and Eric, and six grandchildren, Jason, Ryan, Jordan, Alexander, Shea and Hailey.