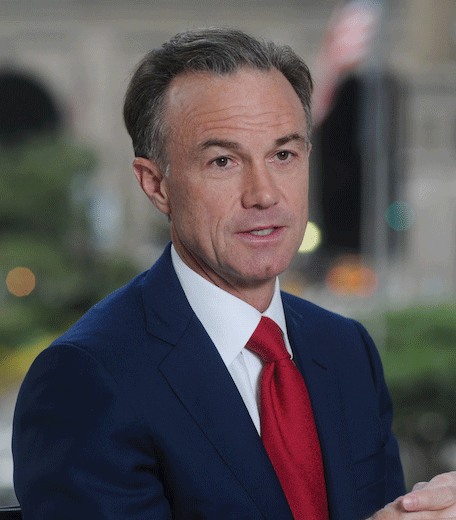 Fleming opened by pointing out that the values of younger people are different from those of their parents.

According to Fleming, 87 percent of today’s Millennials think that where they put their money is important. This number is probably closer to 95 percent for Generation Z. The main way that people invest sustainably is by investing in companies that adhere to Environmental, Social and Governance principles (ESG).

“Environmental” in ESG refers to the company’s policies regarding climate change, energy efficiency and sustainability. “Social” includes labor relations and policies such as child labor and overtime compensation.

“Governance” refers to the board quality of companies, usually with a specific focus on diversity and transparency.

Fleming said that when Rockefeller Capital Management does an ESG review of a company, they look at over 80 different criteria within those larger categories.

Fleming said that the idea that investing according to ESG principles, also known as “impact investing,” does not yield as high of returns as traditional investing focused on maximizing returns with little heed given to the modes taken is a misconception.

“The share price [starts] going up when businesses start focusing on things other than shareholder value,” Fleming said.

Impact investing is in direct contrast to the late 1980s and early 1990s, in which businesses had a one-track-mind centered on profits, Fleming said.

Fleming also discussed the numbers from Barron’s list of the 100 Most Sustainable Companies.

“The fact that Barron’s even has a list is remarkable, and this says that the demand [for sustainable companies] exists,” Fleming said.

Barron’s list reported that owning “a bucket” of companies that made it into the top 100 most sustainable companies yielded a 28.6 percent return, whereas owning a comparable “bucket” of companies on the S&P 500, an index of the largest U.S. publicly traded companies, only saw a return of 21.8 percent. Companies are responding to the investors’ desires for sustainable businesses, Fleming said.

In 2018, 78 percent of companies on the S&P 500 published sustainability reports. According to Fleming, this number was probably only eight percent 10 years ago.

In addition to changing modes of production, businesses are also starting to increase diversity, particularly in leadership positions. In 2018, 49 percent of S&P 500 company boards had three or more women on them.

Fleming thinks that this is a change for the better.

“The best leadership team is a very diverse and eclectic group of people,” Fleming said.

He explained that, in addition to thinking differently from one another, the best teams he has worked with were diverse in background, ethnicity and gender.

Fleming said he believes that ESG investing is an especially relevant discussion for today’s young people and college students around the world as more and more Millennials and Generation Z are acquiring wealth and being particular about its impact. Fleming attributes this to climate change, something that younger populations have experienced first-hand.

“[Millennials and Generation Z are] changing the world from an investing standpoint,” Fleming said.

“[Fleming taught me about] the direction for frame and structure of what investors nowadays are looking for,” Xu said.