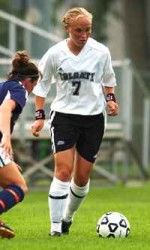 The women’s soccer team put an exclamation point on its already impressive season last Friday when it beat 13th-seeded Arizona in the first round of the NCAA Tournament for the team’s first-ever win in the NCAA playoffs. The team went on to lose its next game in the round of 32 to Connecticut, ending Colgate’s historic season,The Raiders came into the tournament riding a four-game winning streak and playing some of their best soccer of the year. In the last two weeks, the Raiders clinched the Regular Season Patriot League title, won the Patriot League Tournament and defeated eighth-ranked Princeton. The team was trying to win its first-ever game in the NCAA Tournament and needed to beat Pac-10 Champions Arizona to due so. The game was certainly going be a challenge for the Raiders but, according to senior co-captain Kyle Koch, “we had a lot of momentum and confidence from the way we were playing. After beating Princeton we knew we could play with a ranked team.” The game was played on a cold snowy evening in Starrs, CT that gave Arizona a nice introduction to winter weather in the Northeast.The game started with the Wildcats generating most of the scoring opportunities and dominating the flow of the game, but the Raider defense kept the Wildcats from finding the back of the net. The Wildcats had one of their best opportunities of the game five minutes in when a Mallory Miller header sailed high over the crossbar. As play continued in the second half, the Raiders began to have some scoring opportunities of their own, forcing Wildcat keeper McCall Smith to make to key saves to preserve the scoreless tie. The Raiders finally found the back of the net on a play that started with a shot by junior midfielder Carolyn Warhaftig that was blocked by Smith. A loose ball scramble resulted and sophomore midfielder Megan Bergman gained control of the ball and fired into the back of the net to give the Raider’s a 1-0 lead. Armed with a one-goal lead, the Raiders never looked back. The Raider defense was able to shut down the Wildcats with the help of snowy field conditions that slowed down both offenses. The defense recorded its ninth shutout of the season and its sxith with junior goalkeeper Luisa Miller in net. Miller held opponents to just .74 goals a game this season. When time expired, the Raiders became the first team from the Patriot League to ever win a game in the NCAA Tournament and earned the right to play UConn in the second round. The Raiders and the Huskies played a close game for 30 minutes, at which point UConn got a break and received a questionable penalty kick call. Miller again came up huge for the Raiders, turning aside the penalty kick to keep the game tied.With five minutes left in the half, the Huskies broke the tie thanks to a Karyn Riviere goal assisted by Kristen Graczyk. The two teams went scoreless for the rest of the half and the Raiders went into halftime trailing, 1-0.The second half was all Huskies. UConn came out on fire and scored three goals in 10 minutes to put the Raiders away. Jennifer Sullivan scored twice and Zahra Jalalian added another to end the Raiders’ season.While the Raiders’ year ended with a loss, the team can take solace in one of the best seasons in school history. “We had a hell of a season,” said Koch. “We continued to improve and finished strong.”The Raiders finished the season 13-7-2 and captured their first Patriot League title in four years. The Raider’s defeated two nationally ranked teams and had five all-Patriot League selections: Warhaftig, first-year Franny Iacuzzi, and sophomore Kellen Kroll earned first-team honors, while junior Kelly Kuss and sophomore Jackie Burch made the second team. Iacuzzi was also named Patriot League Rookie of the Year and Kroll was named the Patriot League Defensive Player of the Year. But the team’s crowning achievement came last weekend, when, for the first time in school history, it was one of the last 32 women’s teams in the country still playing soccer. The Raiders will return nine of 11 starters next year and will once again be in the hunt for the Patriot League title. Seniors Heather McSherry, Koch, Ali Bernardini and Meredith Rovelli all played their last game in a Raider uniform on Sunday. “It’s sad it’s over but we couldn’t ask for a better ending,” said Koch. “I think I speak for all four seniors when I say we are lucky to end our soccer careers on such a fun and successful team.”