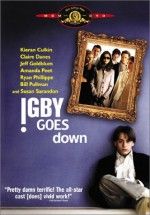 Everybody goes through some type of adolescent crisis with their parents, whether it is over who is invited to your Bar Mitzvah or how short your skirt can be for the ninth grade semi-formal. At some point, there is always going to be conflict between a teenager and their parents. Of course, the intensity of this parent-child argument and the lasting affects it will have on both parties’ lives varies. For Igby Slocumb, (played by Kieran Culkin) preppy teen angst takes on a whole new meaning. “Igby Goes Down” is a film that explores the atypical dysfunctional family and the kid that must suffer through life underneath the dictatorship of his parents so that one day he might have something to discuss in therapy. The movie paints a portrait of the Slocumbs, a family which uses money as a means to its every end-from paying off parochial school priests to buying enough drugs so that the whole family is happy, or at least, sedated. With Susan Sarandon playing the role of heinous matriarch in the family, Bill Pullman the schizophrenic “Wall Street made me crazy” Dad, and Ryan Phillippe as the hated somewhat fascist older brother, the movie begins by coupling a blockbuster cast with more of a cult film tone. As we meet the characters in “Igby Goes Down,” it becomes more and more apparent that aside from being billed as a dreaded “coming-of-age” movie, it is a satire on the lives of those who are upper-class and know it. Igby is caught between running away from everything and everyone who is a part of his wealthy upbringing and using his never ending trust fund to get him through life and keep him with a constant supply of pot. Though he does make a few attempts to live on his own, Igby never strays too far from using his CEO godfather for help. It is this struggle between wanting to escape and being inextricably linked to his family that eventually leads to Igby’s fall. Since the audience only gets life in the Slocumb family as seen through Igby’s eyes, we also only see things unfold from the perspective of a young boy who is not only ignorant about some family issues, but also in denial. However, this also allows the audience to relate to Igby more than if he were just another character. Relevance to life in this movie is something that can be debated. Being hysterically morbid and also a satire, it definitely takes a dry sense of humor (and one with some knowledge of East coast mentalities) to understand and see the comedy in “Igby Goes Down.” Many of Igby’s witticisms stem from his innate snobbery, adding to the comedy of the movie, but also playing to only a certain portion of the population (inclusive of a considerable amount of Colgate students). For instance, when Igby is kicked out of yet another prestigious high school for his unspecified “rebellious behavior,” he is asked where he thinks he is going to end up. His response, “I don’t know, Choate?” Considering Igby’s mortal enemy throughout the movie is his mother, the obvious Freudian jump for a screenplay would be to portray his relationships with women as anything but functional. Enter Amanda Peet and Claire Danes to play the two women in Igby’s life and also the two main causes for much of his happiness and grief. As a dancer who does more cocaine than musicals Peet’s Rachel and Danes’ Sookie Saperstein, an Upper East Side intellectual, are at opposite sides of the spectrum. However, they both add to not only the portrayal of Igby’s character, but also the absurd and hysterically funny aspect of the film.There is nothing like a dark comedy to get you through a cold and bleak fall day in Hamilton. Whether you relate to Igby’s sense of disillusionment or the pressure of having to be the next broker of the year, this movie is about adolescence, something which we have all been through. Renting “Igby Goes Down” will give you just enough humor to make you laugh while also keeping to the bitter tone that this season calls for.