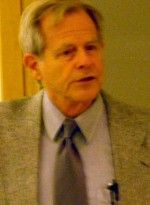 “The only way [John] Kerry can win is if [George] Bush loses,” Theodore Lowi said in his lecture Thursday evening to Colgate students and faculty. “I am making two predictions: one, Kerry cannot win, and two, Bush could lose.” Speaking to an audience of more than fifty, John L. Senior Professor of Political Institutions Theodore Lowi, of Cornell University, delivered his speech entitled “It’s Not About Who Wins, Stupid. It’s About What Wins.” Lowi, one of the nation’s most renowned political scientists, expressed his views on the upcoming presidential elections in a Thursday night lecture in Persson Auditorium. The 72-year – old scholar is the author of several textbooks about American government. He also expanded the American political vocabulary, coining phrases such as “legicide” and “politics follows policy”. “One wouldn’t get in an argument if one said that Lowi is one of the most influential political scientists,” Political Science Professor Tim Byrnes said of Lowi during his introduction. “In 1984, I went into his office, knees knocking,” Byrnes said. “[His advice on my dissertation] set me on course to get here today.” In his 45-minute speech, Lowi offered his theories of the Republican Party and the impact it will have on the November 2 election. “There are no national parties,” Lowi said, “because there are no national elections. Every four years, the state parties have to be mobilized into coalitions [to nominate presidential candidates].” Lowi focused on the coalition of the Republican Party in his speech, emphasizing its hegemonic structure, despite having changed over the years. “In the fall of 1994, my book,”The End of the Republican Era ,was going through copy editing when the Republicans under Newt Gingrich took control of both the House of Representatives and the Senate,” Lowi said. “The publisher asked if I wanted to delay publishing and I said, ‘No, if I’m wrong, it is for the right reasons.'” Lowi highlighted a so-called “morph” in the party to become more like the Tory party of Britain, while at the same, time the Tory party, under Margaret Thatcher, was becoming more like Ronald Reagan’s Republican Party. Thus, while Lowi believes that the Republican Party should no longer be called that, as long as the coalition of the party holds together, it is unbeatable. “It has crystallized,” he said. “If it cracks and weakens, the coalition will fall faster.” Lowi identified indicators of the weakness in the criticism of George W. Bush that is coming from his political right. Lowi continued that all Kerry had to do in the campaign was to make no serious mistakes and let the Republicans destroy themselves from within. “Hypocrisy will bring the Republican Party down; the inability to live up to their own ideals.” Lowi entertained questions following the lecture on a variety of topics from why the neo-conservatives have risen in power to why he believes a Democratic coalition has not emerged. Senior Chrissy Hart, a Political Science major, was enthralled with the lecture by Lowi. “It was one of the best lectures I’ve heard here by far!” Hart said. “I think the salience of the issues combined with the clarity of how he analyzed them was great and extremely relevant.” Lowi closed with”a big coalition [such as the Republican Party] falls from within itself.”