Dunk for Charity: It’s Not Just About Balls and Donuts 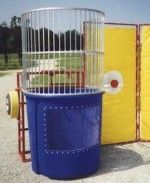 The verb to dunk can take on various meanings. It can apply to the people we see at Dunkin’ Donuts who strategically insert their delicacies into a Styrofoam cup of freshly brewed coffee. It can apply to the adorable Nabisco advertisements where a child “dunks” an Oreo into a tall glass of milk. It is a verb that can also be used to define the athletic prowess of the infamous Michael Jordan, who introduced a new shooting technique requiring a player to literally soar through the air and slam “dunk” the basketball into the hoop. However, there is also another form of dunking that people do not often associate with the term. This activity involves a person who waits courageously on a small ledge above a sizable tank of water (or other substances) while his peers throw balls at a small, red target in an attempt to “dunk” this brave soul into the tank below him/her. Sound exciting? Luckily, our very own Colgate campus will be hosting such an event this very weekend. Seem a little out of the ordinary? Dunk tanks may seem a little uncommon, but then again, when has Colgate ever been run-of-mill? Tomorrow from 12-2pm, the Junior Class Council is sponsoring a dunk tank event located in the Commons. The last time a dunk tank was utilized as a fundraiser was a few years ago and organized by professors on campus. However, this year, students are motivated and taking charge of making a difference in their community. All proceeds from this event will go the Hope House in Utica. Although the junior class has organized this event under the direction of Junior Sian-Pierre Regis, the class council members, sorority and fraternity house members and members of the faculty are also lending a hand by volunteering to be “dunked.” The Class of 2006 holds numerous fun activities to raise money; their annual goal is to have at least three various forms of events which would incorporate a community, social and career aspect. The upcoming dunk tank will dovetail the volunteer and social aspects goals by hosting a brunch during the fundraiser. The dunk tank will be fairly priced around $2 for three balls and the Class of 2006 aims to raise around $300 for the soup kitchen in Utica. When asked to give his thoughts on the upcoming event, Regis enthusiastically stated, “We are really excited for this event because it’s the first event of the year for the Class of ’06. In addition, it is wonderful that we were able to come up with an event that would include a good cause but through a fun and interactive aspect. We [the Junior Class Council] think it’s really cool that we are able to host two events simultaneously, and we are anticipating a good outcome.” The event is open to everyone on campus, and should prove to be an extremely entertaining event. An added bonus, in the words of Regis, “You can get a better brunch than Frank while having a great time!” So come and support the Class of 2006 and help to make a difference in the larger community. But most importantly, have fun! It’s not very often you get to slam dunk your friends into a cold tank of water!