Women And Men Raise Their Voices During Open Forum 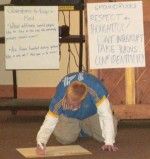 By Victoria KlarfeldMaroon-News Staff The first Colgate Women’s Forum was held Monday night in the Clark Room at the Student Union. Sisters of the Round Table (SORT), which requested that no names be used in this article, organized the event to “form a medium to empower women’s voices at Colgate and to come up with possible solutions to our issues.” The few men at the meeting requested that the group of women “be kind to men,” and one male pointed out that “men are not evil.” With those ground rules established, the hook-up culture, dating (or lack thereof) and interracial dating were discussed in depth. The hook-up culture dominated discussion. It was decided that a hook-up can mean “making out, making out and a little more or sex – sometimes all three,” and that at Colgate, a hook-up normally includes sex. With regard to who hooks up and why, most people agreed that men have random hook-ups the most. “With guys it’s a competition of numbers – how many girls have you hooked up with? With girls, it’s like working your way up the guy food chain – it depends on who you’re hooking up with,” one woman said. One woman believed that a hook-up culture could possibly be limited to colleges like Colgate, saying “maybe it’s because it’s the south, but they date a lot there and there’s no real hook-up culture. Hooking up here [at Colgate] is like dating, except, you know, minus the actual date.” Dating, according to the majority of the forum, does not exist at Colgate. Instead of dating, “you hook-up with someone for a few weeks; you decide you like them and hang out sober a few times, and then it’s just consistent hooking up.” One man said he believed that the “Colgate campus is too small to date. I don’t want to date a girl and sit next to some guy in class and think ‘He slept with you freshman year.'” Another man retorted “but in the real world are you going to look at every guy and wonder if he’s slept with your wife?” The hook-up culture can be especially charged for women at Colgate. Some women at the forum said they believed that casual sex could be empowering for women. “If you’re comfortable, consenting and safe, is casual sex really a problem?” one woman asked. Others disagreed: “I’m still trying to figure out how a woman can be empowered by sleeping with a lot of random guys,” one woman said. Another woman noted that people often say “that girl’s slept with x number of people ‘but she’s still a nice girl,’ as if having casual sex makes her a bad person.” Interracial hook ups and dating brought up issues of the lack of diversity at Colgate. “If you don’t date interracially,” one woman said,””you’re going to have a pretty small pool at Colgate.” Most women present agreed that “it’s more common for a guy to hook up interracially,” normally a black man with a white woman. One woman said that “white men don’t like to date black women.” From the male perspective, one man said “in general, from what I’ve heard, white females do more things. They’re perceived as easier to get and more experimental,” which was perhaps the most controversial statement of the evening. There will be another Colgate Women’s Forum held in the near future. Women are especially encouraged to attend, but men are also welcome.