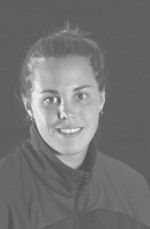 The Raider women’s soccer team increased its winning streak to five games last Saturday when the women defeated Patriot League foe Holy Cross, 3-0. With the win, the Raider’s remained undefeated in Patriot League play and stayed atop the Patriot League standings.The Raiders were just too much for the Crusaders, as they started quickly with a goal by junior midfielder Carolyn Warhaftig 2:30 into the game. The Wyckoff, NJ native scored with the help of first-year Franny Iacuzzi and junior Kelly Kuss. It was Warhaftig’s fourth goal of the season and proved to be the game-winner for the Raiders. About nine minutes later Iacuzzi scored her 13th goal of the season off an assist by Kuss, her 12th assist of the year. Both Iacuzzi’s goal total and Kuss’ assist mark are tops in the Patriot League. Kuss and Iacuzzi have formed the Patriot League’s most lethal scoring combination this year, combining for 15 goals and 17 assists. The Raiders kept the pressure on seven minutes later when sophomore Megan Bergman scored her second goal of the season, with senior defender Heather McSherry credited with the assist. The goal put the Raiders up 3-0 and took Holy Cross out of the game for good. While the offense provided most of the fireworks against the Crusaders the defense was once again rock solid. The Raiders recorded their Patriot League leading fifth shutout of the season in blanking the Crusaders. The Raider backfield was aided by a strong effort by Colgate’s midfield unit, which allowed the Raiders to control the flow of the game. The defense has dominated Patriot League competition this year, allowing only two goals in four games. With the win, the Raiders improve to 4-0 in the Patriot League and 9-4 overall. Colgate’s Iacuzzi was once again honored this week, as she was named the Patriot League Rookie of the Week. It is the second time Iacuzzi has received this award and is the second consecutive week with honors for the Evanston, IL native, after being named the Patriot League Offensive Player of the Week last week. Iacuzzi has 13 goals and 5 assists on the season, giving her 31 points, a Colgate first-year record. Iacuzzi is also rapidly approaching the Colgate all-time first-year goal record of 15. Fellow forward Kuss is also making her way up the Colgate record charts. Her two assists against Holy Cross moved her into second place all-time for single-season assists with 12. The Raiders have put themselves in excellent position this year to take home a Patriot League title. The team’s 4-0 record places it atop the league and it have already defeated second-place American in a key 2-1 victory last week. Senior co-captain Kyle Koch said that the team has taken “each game one at a time.” According to Koch, this approach has been a major key to the team’s success and is something the players need to continue to do throughout the rest of the season. The Raiders have also been playing as a team, with everyone “taking responsibly for all aspects of the game.”Koch thinks that the team is capable of winning the league title if it continues to play like it has played recently. She is hopeful the Raiders will be able give their home fans a chance to watch them play for the championship here at Van Doren Field. The team has three league games standing between it and an undefeated regular season, with matches against Lafayette, Army and third-place Lehigh remaining on the schedule. The team takes on Army tonight at 7 p.m. on Van Doren Field and hosts tomorrow, scheduled for a 1 p.m. start.