Homosexuality Through The Ages: An Issue Of Legality 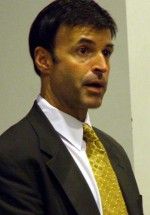 Casey Sprock, ’86, addressed a group of students and faculty Wednesday night about sex and the law. Professor Sprock, who graduated from Colgate with a degree in Philosophy, is a practicing lawyer and an adjunct professor at Syracuse Law School, where he teaches courses on how people are treated differently because of actual or perceived sexual orientation. Sprock lectured on the past, present and future implications of laws governing sexual activity. Starting with Puritan New England, Sprock highlighted laws against activities that fell under “crimes against nature-basically anything that people didn’t want to talk about.” These crimes, including any form of sexual deviance, were punishable by banishment, public whipping or, in extreme cases, death. “Our legal system is based on a religious code,” Sprock said. “Our country was founded by Puritans and our law is influenced by that religion.”With the rise of modern cities after the industrial revolution, Professor Sprock argued that a “queer culture” began to develop. “Cities provided a safe place to form communities … homosexual groups became identifiable and you begin to see the law changing,” he said.Laws governing sex in the 1950s largely focused on male homosexuality. Sprock noted that “society didn’t find female homosexuality as offensive. For men in power, if there wasn’t a penis, it wasn’t sex.” In 1957, England overturned a law which declared sodomy illegal. “They believed that it made no sense to have sodomy declared a criminal act; there was no victim if there were two consenting people,” Sprock said. Largely as a result of that overturning of the sodomy law, Sprock said, “every state in the US toughened up sodomy laws.” Sprock highlighted two important sodomy cases, Bowers v. Hardwick in the state of Georgia and Lawrence vs. Texas. The first case, involving two men caught engaged in homosexual activity, eventually went before the Supreme Court, which decided not to overturn the law against sodomy in the state of Georgia. “Instead of focusing on the sodomy law itself and asking whether it was valid under the Constitution, the question became ‘is there a fundamental right for homosexual sodomy,'” Sprock said.The 2003 Lawrence v. Texas case, however, also involving male homosexual activity, overruled the Bowers v. Hardwick decision. This ruling deemed laws against sodomy unconstitutional when applied to two consenting adults engaged in private sexual activity. Professor Sprock argued that because only nine states had sodomy laws in 2003, with only four of those being strictly against homosexual sodomy, there was less opposition to rejecting sodomy as a crime. “This ruling meant that gay people were no longer criminals,” Sprock said. Sprock discussed the problems gay high school students face in America today, as well as the issues surrounding families with gay parents and the future of estate law. “Our legal system is designed on an equation that has a husband, a wife and children they get from that marriage,” Sprock said. “The vast majority of families fall outside of that equation.”