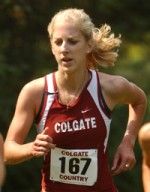 Last weekend brought mixed results for both the Raider men’s and women’s cross country teams. The men competed at the annual Albany Cross Country Invitational, while the women traveled to Pennsylvania for the Penn State National Open. Sophomore Mike Hanlon has been leading the men’s team this season. His finishes have placed him among the strongest runners both on his team and when compared to the competition as well. Despite the wet conditions, Hanlon finished in second place in the 8K with a time of 25:02. The team-high finish awarded Colgate enough points to place eighth overall out of the 29 competing squads. After Hanlon, the next Raider to cross the finish line was junior Nate Rosenthal, who came in 30th place with a time of 26:02. Sean Curran, a junior from Saratoga Springs, NY, finished the race in 26:25, placing him 47th. Two other sophomores, Scott DeRoo and Andrew Isabel, rounded out the top five by taking 51st and 109th place, respectively. “We would have liked to have placed higher in the team scoring, but considering that one of our top guys was injured, we ran pretty well,” Hanlon said. “We had two of our [first-years] finish their first collegiate cross country race, so that is always an important accomplishment. And a couple guys had personal records, which is awesome because the Albany course was running pretty slow.” The individual title was taken by Anthony Traux of New Hampshire, who finished with a time of 24:46. Syracuse took home the team title after finishing with four of its men in the top 11. The Raider women did not finish as well in University Park, PA as the men did in Albany. After all the points were tallied, the Raiders finished with 702 and a 26th place finish out of 41 teams. The team did manage to finish ahead of its Patriot League foe Lehigh, which took 29th place. Junior Lia Cross, last week’s Patriot League Runner of the Week, continued to show her strength last weekend. “In last weekend’s meet, our finishes were all very close, much closer than they were in the last couple of years that I’ve been on the team,” she said. Cross was the second runner to finish for the Raiders, finishing in 115th place with a time of 23:06. Sophomore Hannah Failing led the Colgate team with her 109th place finish, crossing the line four seconds before Cross. First-year Kathryn Marvel came in right on the heels of Cross, taking 131st place. “We have great depth on the team, everyone is focused and we know what we have to do,” Cross said. “All of us are continually pushing each other in both meets and practice, and all of our hard work since the beginning of the summer is really paying off now.” This depth can be seen in the finishes of the “B” race. The top finisher for the Raiders in this race was first-year Laura Snepenger, who finished in 24:35 and took 34th place. Sophomore Meaghan McAnaney followed Snepenger, placing 47th with a time of 24:56. Sophomore Macrina Seals finished at 25:02, ending up in 55th place. These times were not far behind those of the “A” race. Both teams have this week off, but will compete next Saturday at Bucknell in the Patriot League Championships. “I believe that we have so much potential in the upcoming Patriot League Championship,” Cross said. “We are really ready to go out there in the most important meets of the season against some really tough teams and run our best. Overall, I am just really excited for our team and I have high hopes for the future.” “We have Patriots coming up in two weeks, so we are continuing to work hard and hopefully the guys that have been banged up will recuperate,” Hanlon said about the Raider men. “This is probably our most important meet of the season and I think that we will do really well. They have us picked pretty low, but I think that we will surprise some people.”