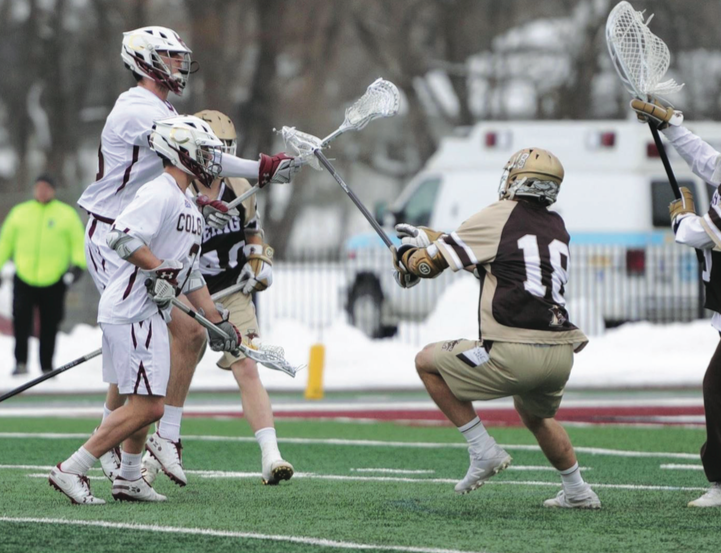 Colgate lacrosse has suffered back-to-back losses after opening the season with impressive wins.

On Saturday, March 2, the Colgate Men’s Lacrosse Team faced the Lehigh Mountain Hawks in their first home game of the season. Entering the game, they were 2-1, claiming impressive victories over Syracuse and Binghamton early in the season. The game was a competitive Patriot League matchup be- tween Colgate, ranked 16th in the nation, and Lehigh, who claimed the second place title in the Patriot League last year.

Lehigh was first on the scoreboard with a goal early in the first quarter. This goal was answered by senior attacker Sam Cleveland’s unassisted goal with four minutes remaining in the quarter. This 1-1 score did not last very long. Only a minute later, Lehigh retaliated with a goal to close out the quarter with a 2-1 score. The Raiders were outscored in the second quarter 4-1, the only Colgate goal of the quarter coming from junior attacker Nicky Petkevich, assisted by Cleveland.

Entering the second half, the score was 6-2 in Lehigh’s favor. However, this did not discourage the Raiders. They began the half with four consecutive goals scored by Cleveland, two from first-year attacker Brian Minicus and sophomore attacker James Caddigan. Caddigan’s goal scored with only four minutes left in the third quarter tied the game at 6-6. This shift in momentum, in favor of the Raiders, was thwarted by Lehigh with three unanswered goals to close out the quarter bringing the score to 9-6.

Cleveland kicked off the beginning of the fourth quarter by scoring his third goal of the game, tallying his second hat trick of the season. Unfortunately, this was not the spark needed for the Raiders to stake claim to their season’s first Patriot League victory, as Lehigh scored the next goal, their tenth of the game, with eight minutes remaining. Petkevich scored an unassisted goal with 6 minutes left in the quarter, the final of the game, making the final score 10-8.

“[It] definitely was not how we wanted to start Patriot League play and losing our home opener. We started off slow and just put ourselves in a hole that was hard to get out of but we battled and that’s what’s going to help us win games,” Petkevich said.

Although the loss was a bitter one for the Raiders, they enter a week of practice and planning to prepare for a victory on Saturday March 9. They will be facing the Boston University Terriers, hoping to claim their first Patriot League game of the season.

“I think we played a good game and we just want to come out stronger in the first quarter next week. A loss never fully sits right but we all recognize that the best thing that we can do as a team is to prepare to win against another worthy Patriot League opponent this Saturday,” junior defender Josh Karp said.

“Everyone is pretty excited to get back out there, so this week of practice will be competitive,” junior attacker Griffin Brown said.

This competitive attitude will provide a spark for the Raiders, which they will need as they enter their battle against the Terriers. Boston is currently 5-1, with victories over teams including Dartmouth, and most recently, Vermont. Last year, the Terriers advanced to the second round of the Patriot League tournament, where they lost to Loyola Maryland.

This eagerly anticipated match will begin at 1 p.m. on Saturday, March 9, at Andy Kerr Stadium. The game will also be streamed on the Patriot League Network.