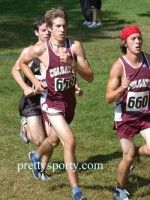 The Colgate cross country teams began their 2004 seasons on a high note, as both the men and women’s teams delivered impressive performances at the Harry Lang Invitational on Saturday. The Invitational featured several competitive teams such as Delhi College, Binghamton University and SUNY-Morrisville, and the race was ran on an exceptionally warm and humid September afternoon. The Invitational also marked the first meet of the season for Colgate and the impressive performance of the Raider runners gives reason to believe that this year will be an exciting and successful season for the Cross Country teams.The men’s team saw some terrific individual performances from their team leaders, which helped propel the team to place first overall in the 7,800m event of the tournament. Sophomores Mike Hanlon and Scott DeRoo, along with junior Sean Curran, all delivered strong performances, as they finished in the top three positions respectively, with only 17 seconds separating their times. Sophomore Andrew Isabel and senior Jon Barinholtz also ran strongly, with Isanbel finishing tenth and Barinholtz coming in closely after him in the 12th spot. Senior Jeremy Wattles performed impressively as well, finishing 14th overall with a time of 28:41:00. In addition to their dominant performance in the 7,800m, the Raider men also performed strongly in the 4,200m race, with junior Nate Rosenthal finishing second overall, coming in only eight seconds after the first place runner from Nazareth College. With a strong roster comprised of both fresh young talent and seasoned veteran leadership, the men’s team is sure to see more victories as the season progresses. Equally impressive was the performance of the Colgate women’s team. The women were able to place eight runners in the top 13 of the 4,200m race and also placed second overall as a team in the 6,000m run. The team received stellar performances in the 4,200m race from first-years Liz Kennedy and Elisa Payne, who finished second and third, respectively, with only 10 seconds separating their finish times. In the 6,000m race, the Colgate team was spearheaded by the efforts of first-year standout Sarah Miller, who came in sixth place overall. Miller was followed closely by classmate Kathryn Marvel, who finished seventh, and junior Emily Tansey, junior Lia Cross and sophomore Hannah Failing, who finished in eighth, ninth and tenth place, respectively. Commenting on the race, Tansey expressed her satisfaction with the great start of the season.”When I was a [first-year], we struggled to fill the top seven spots,” Tansey said. “Now we have 15 people who are much closer in skill level, so we can run together and work off each other. We are fortunate to have some very talented [first-years], and this is definitely the strongest team we have had in years.” The Raiders are very excited about the upcoming season, and the expectations for this talented group are high. Both the men and the women will be in action once again next Saturday at the Binghamton Invitational.