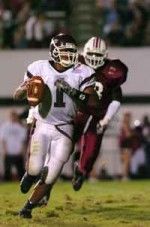 “I really enjoyed playing at UMass,” said head coach Dick Biddle after the football team opened their season with an away game against the Minutemen. “It was a great crowd, a great atmosphere. The only thing I didn’t like was the outcome.”The outcome was one the Raiders hadn’t experienced in a regular season game in almost two years. After 18 straight regular-season wins dating back to 2002, Colgate was defeated by Massachusetts on Saturday. UMass took a 14-0 lead in the first quarter and never looked back, capitalizing on Colgate’s inconsistent play on offense, defense, and special teams on their way to a 30-20 win in front of a raucous crowd of over 16,000 at McGuirk Stadium.Steve Baylark of UMass opened the scoring in the first quarter with a 32 yard touchdown run on the Minutemen’s second drive. Minutes later, Baylark struck again, this time from 13 yards out to put UMass ahead by two touchdowns before the quarter had ended. The Raiders responded in the second quarter. After a Brian Anderson interception gave Colgate possession, Senior quarterback Chris Brown connected with Luke Graham for a 31-yard touchdown on a play-action pass to cut the UMass lead in half. On the ensuing kickoff, the Raiders recovered a UMass fumble and seemed to have taken the momentum away from the home team. But another Brown-led drive was stopped on the goal line and the Raiders were forced to settle for a field goal, a reoccurring theme of the day.”We had the ball inside their 10 yard line four times, but twice came away with field goals. That’s not going to get it done,” said Biddle. “We had opportunities to win the game, but we didn’t make it happen.”The minutemen ended the half with a field goal as time expired to take a 17-10 lead at halftime.Branch punched in a touchdown in the third after a long Raider drive which was extended by a variety of UMass penalties. Branch’s score pulled the Raiders to within six. But the Raider defense could not come up with a stop against the high-powered UMass attack. Jason Peebler caught touchdowns of 50 and 58 yards in the second half for the Minutemen to seal the game.

Any hopes of a miraculous Colgate comeback were dashed when Branch and Brown were stopped on three straight runs from inside Massachusetts five yard line in the fourth quarter. Senior Lane Shwarzberg came in to kick another field goal for the Raiders, but it would not be enough. On the final play of the game, Brown threw his fourth interception, a fitting ending to a dismal day for the Raiders. Umass’s commitment to stopping the run limited Branch, who averaged 145 rushing yards per game in 2003, to 62 yards on seven carries. Combined with an early deficit, the focus on Branch forced the Raiders to abandon their run-first game plan on offense. Brown threw 48 times for 348 yards, both career highs. Senior DeWayne Long caught nine of those passes for 117 yards. Brown’s strike to Graham was his lone touchdown. As Brown’s four interceptions indicate, a pass-happy offense is not the Raiders’ first choice. “We threw that much out of necessity,” said Biddle. “But when you’re down two scores and the run game isn’t working, you don’t have much of a choice.” On defense, the inexperienced Colgate secondary gave up 258 yards through the air. Though they showed flashes of brilliance in the form of interceptions by Anderson and sophomore Geoff Beane, the defensive backfield was prone to giving up the big play, as UMass averaged almost 20 yards a completion. The secondary’s up-and-down night seemed to embody the inconsistency of the Raiders on the whole. “We were inconsistent all around,” said Biddle. “You can’t play that way against a good team like UMass and expect to win.” Biddle expressed particular frustration with Colgate’s special teams. Raider punter Jason Sutton averaged only 28.2 yards per punt and kickoff team gave up 24 yards per return to the Minutemen, giving UMass the clear edge in terms of field position. UMass was called for 11 penalties in the game, and three times had touchdowns taken away by the officials, including the return of an apparent fumble by Brown that was ruled an incomplete pass. The Raiders have now lost seven of their last nine season openers. They take on Dartmouth tomorrow in their home opener looking to avoid their first two-game losing streak since dropping the first two games of 2002. The Raiders have beaten Dartmouth in their last five meetings, including last year’s 31-9 domination of the Big Green. But Biddle is wary of overconfidence against Dartmouth. “They’re a much-improved team with sixteen starters back from last year,” the coach said. “Our concern is what we have to do to get better and pull out a win this week.”